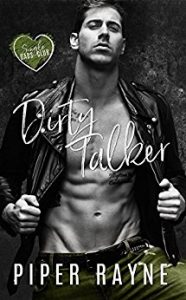 Dirty Talker by Piper Rayne
Published by Self on 06/11/2017
Genres: Contemporary Romance, Romantic Comedy
Buy on Amazon US
Goodreads

I used to think that if you could combine all three into one female, you’d have the perfect woman. The other guys in the Single Dads Club razz me for wearing the crown of the forever bachelor. The one who’ll be in his seventies chasing down young hotties in his wheelchair.

Then why the hell does Ava Pearson—an outdoorsy girl, a brunette, and a woman who screams stability and responsibility—seem to be the only woman on my mind lately?

Especially when I’ve got enough obligations without adding any complications to the mix—my son, my bar…well, that’s about it. But that’s enough for a guy like me.

It’s the cupcakes. It’s gotta be the cupcakes she bakes that keep me coming back for more. After all, the way to a man’s heart is through his stomach, right? Well, it’s apparently a direct target to his dick, too.

Did I forget to mention that she’s my buddy’s daughter…another member’s daughter?

Ava might say she can handle being friends-with-benefits, but I’m not sure she can. Unfortunately for her, I’m too selfish of a prick to care—until I do.

A month or so, I received an ARC for a Piper Rayne book, Real Deal, which was book #1 in the Single Dad’s Club. Excellent book! But, there was this one guy….a total douche to be honest…Dane. I mean, he’s got a dirty mouth which is totally hot, but his actions? Blah. I was not looking forward to book #2, which is Dirty Talker. Honestly, I thought about just skipping over his book.

I WAS SO VERY, VERY WRONG ABOUT DANE.

I enjoyed how the book started out with a note from Dane explaining himself. I knew right then and there that this book was going to throw me for a loop. I had a feeling I was going to fall for Dane, big time.

Dane owns Happy Days and is cocky, arrogant man who knows what he wants. Ava is the one night stand that has reappeared as the owner of the Mad Batter bakery across the street from him. The minute Dane walks in the bakery, he knows it is owned by the girl, his secret fling, that has been occupying his mind.

Knowing they have something smoking hot between them, an exclusive friends with benefits relationship would work perfectly, for the both Dane and Ava. Even though they think it’s nothing more than sex and friendship, the entire town of Climax Cove is talking about the baker and the bar owner spending a lot of time together.

Can Ava and Dane just have a casual sex only relationship? What happens when feelings get in the way? Will Dane ever be able to be the man who commits?

The relationship between Dane and Ava was mind-blowing right from the start. The push and pull between the two, the freaking HOT sex, and just how their relationship evolved was magical.

I enjoyed how the characters from the Modern Love series are once again brought in seamlessly. And you can’t forget the talk of the “unicorn cock” 🙂

There is a twist…a MAJOR one I did not see coming. I was utterly shocked. Well done, Piper Rayne, VERY well done! It changed EVERYTHING! Right then and there, I fell in love with Dane Murray and his damn groin cleavage!

This story takes a turn and you know Dane ends up making a mistake. But when Dane finally mans up to fix what he’s done? He is truly one incredible guy, not at all like the one I read about in the first Single Dad’s Club book. Throw in Toby, Dane’s son, into the mix and their story is one I will not soon forget.