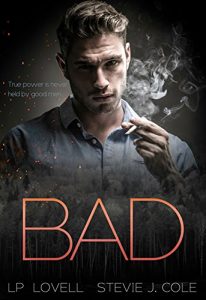 Bad Published by Self on 11/09/2017
Genres: Romantic Suspense
Buy on Amazon US | Kobo
Goodreads

True power is never held by good men, only the most perfect of villains. And she and I are both villains…

Some love stories have no heroes.

When I heard the writing duo of Stevie J. Cole and L.P. Lovell had a new book coming out, I was all “Sign me up”! Bad is the first book in their Bad. Dirty. Power. series (not sure if this is a series or duet, but definitely more than one book) that was one crazy and wild ride.

Ronan Cole is as cold and arrogant as they come. He is ruthless and cunning and feared in Russia. He rules an empire he took from his father and does not care the destruction he left behind to get where he is today. Now he wants something that does not belong to him and will do whatever it takes to obtain it. So he begins a war and captures Camila Estrada to use as an advantage. But Camilla was raised in the world of cartels. She is no stranger to danger, lies, secrets and betrayals.

Ronan wants land in Mexico and he is determined to get it at any cost. To accomplish his goal, he puts two cartels on the warpath. But what he never bargained for was the affect Camila would have on him. She is a worthy prey and adversary. She gives almost as good as she gets. They circle each other at every turn. Who will come out on top?

The push and pull between Ronan and Camilla is captivating. Their chemistry is powerful, but they are both dangerous people. That ending just about killed me, but should not surprise me from these two authors. I cannot wait to see where this story will lead. 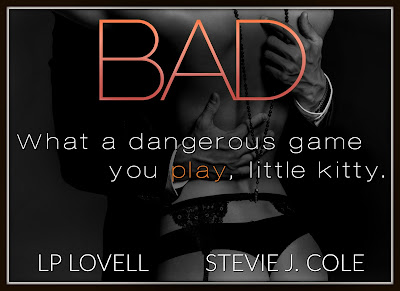 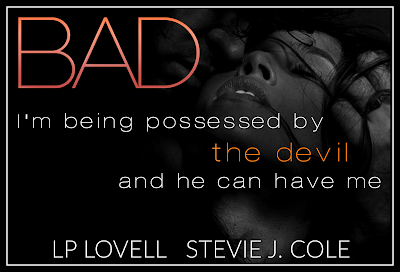 Lauren Lovell is an indie author from England.
She suffers from a total lack of brain to mouth filter and
is the friend you have to explain before you introduce her to anyone, and
apologise for afterwards.

Lauren is a self-confessed shameless pervert, who may be
suffering from slight peen envy.
LP loves to hear from readers so please get in touch.
WEBSITE
FACEBOOK
GOODREADS
AMAZON
TWITTER

Stevie J. Cole lives deep in the woods of Alabama with her
husband and two precious daughters. She studied Epidemiology concentrating on
cancer research but has always had a passion for writing. Some of her stories
will strip you bare, some will give you nightmares, but the one thing she can
promise is that she will always give you stories that make you feel.
Raw. Gritty. Love.
Because sometimes characters need to be flawed.
P.S. Stevie’s greatest fear is the impending zombie
apocalypse. Think about it: swarming armies of decaying, oozing corpses
stumbling around with clicking teeth, trying to eat your face. Nothing about
that is good. NOTHING! 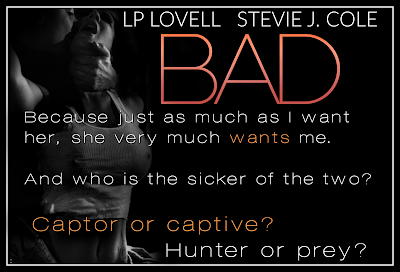