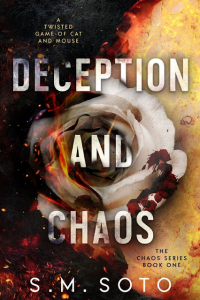 Sophia Cova lived a quiet, normal life, shadowed in sadness after the loss of her parents in a tragic airline accident. With her older brother being her only living relative and her anchor, Sophia is sure she’s destined for a brighter future. But that was until she was taken.

Stolen from her mundane, orderly life, she was drugged, and woke to every woman’s worst nightmare.

With only four grimy basement walls and a rancid mattress, she loses her sense of time, and preserves what’s left of her dignity by hurtling herself into the safety of her mind. The men, the beatings, they come and go with no reaction, until she hears one word that sends an arctic chill through her body. Sold.

On the eve of Sophia’s bidding, at one of the largest sexual slavery rings in the world, all hell breaks loose in the mansion of horrors. Gunfire and screams erupt all around her, as panic rises.

Snatched by one monster only to be taken by another, Sophia slowly starts to learn that not everything is as it seems. When secrets unravel, and the twisted game of cat and mouse ensues, The Puppeteer pulls his favorite strings and chaos brews.

Lives are lost while the clock ticks, and only time will tell who will be killed next…

I absolutely love dark stories. The darker the better, but it’s been a while since I read a truly dark story as Deception and Chaos by S.M. Soto was and I totally devoured it. Sophia Cova was looking forward to her future after such a hard past. Things can only get better, right?

Deception and Chaos by S.M. Soto was a dark and gritty story. It is brutal, honest and terrifying. It is not for everyone, but if you like dark, this is the story for you. It was a slow burn buildup with strong chemistry with twists and turns I am so excited for the next book!

S.M. Soto was born
and raised in Northern California where she currently resides with her son. Her
love for reading began when she was a young girl, and has only continued to
grow into adulthood. S.M. lives for reading books in the romance genre and
writing novels with relatable characters. She refers to herself as a bit of a
romance junkie. S.M. loves to connect with readers and eat copious of donuts
that will surely lead to her demise (carbs are life).