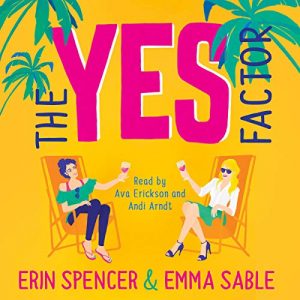 Bex just wants to stay in bed with Outlander.

With 40 just around the corner, divorced single mom Bex is too busy being a chauffeur for her teenage daughter to bother swiping for dates.

Her best friend Liv, who is married to the supposedly perfect man, swoops in from London on a mission to get Bex out of her own bed and in to someone else’s. Liv pushes Bex into a week-long whirlwind of dates, awkward kisses and missed connections.

What could possibly go wrong when Bex agrees to Liv’s harebrained scheme of saying Yes to every possible suitor? And why is Liv so intent on fixing Bex’s love life, or lack thereof?

Just what do you find out when all of your no’s turn into the yes factor?

When I first read The Yes Factor by Erin Spencer and Emma Sable I truly enjoyed he story. It was such a fun and delightful read. I laughed and just lost myself in the story. When I had the opportunity to listen to the audio, narrated by Ava Erickson and Andi Arndt, I just loved it. They truly brought Liv and Bex to life. I loved listening to them bring their friendship to life. The good, the bad and the fun.

Liv and Bex are best friends and always there for each other. However, with lives in separate places, they may not always be as close as they used to be and want to be, but the love and friendship is always there. But could they need each other now more than ever? Liv wants to help Bex enter dating life again and truly give it a try and Liv needs to figure out who she is and what she truly wants.

I just loved their friendship, banter and how they pushed and supported each other. Though they were not always completely honest with each other, you could see what they truly mean to one another. Both Liv and Bex went through so much growth, learning, self-awareness. The Yes Factor by Erin Spencer and Emma Sable was a great read about friendship, life, choices and so much more. It is a great read and/or listen, either way you cannot go wrong! I loved it. 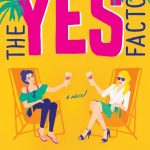