Posted July 27, 2021 by sultrysirens in Audiobook, Reviews by Liz / 0 Comments 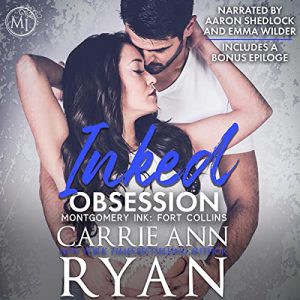 The Montgomery Ink saga from NYT Bestselling Author Carrie Ann Ryan continues with a second chance romance sure to tug at your heartstrings.

When men in uniform showed up on Eliza Wilder-Strong’s doorstep, she knew her life would be irrevocably altered. She not only lost her husband, but the future she’d carefully planned. A year later, she’s looking to start over—beginning with a solo healing vacation. Only she never expects to see a familiar, tempting face along the way.

Beckett Montgomery refuses to want his little sister’s best friend—especially because she’s a widow. Yet there’s no stopping the connection between them. As the temptation to give in intensifies between them, so do the reasons they shouldn’t stay together.

Painful ghosts from both of their pasts stand in their way and sometimes it’s the living that can haunt you when you’re not looking.

As soon as I read the blurb for Inked Obsession by Carrie Ann Ryan I was all in. So, when I had a chance to listen to the audio, I jumped at the chance. Narrated by Emma Wilder and Aaron Shedlock, they truly brought Beckett and Eliza’s journey to life. We first met these characters in Inked Persuasion, the first book in the Montgomery Ink: Fort Collins series, and though I do suggest you read it first, you do not have too. I did, however, love the first book and highly recommend it.

Here we have Beckett, Annabelle’s brother, and her best friend Eliza. Eliza is a widow learning her normal and struggling on how to move forward. She is lost and the last thing she expected was to get the news she did. Where does she go from here? Beckett is hiding secrets from everyone who cares about him. They are hurting, but neither knows how to move forward. Yet neither can deny how things are changing between them. Can they let it happen? Their lives are too intermixed, and their friendship means too much to both of them. Can they find their happily ever after? I loved listening to Inked Obsession by Carrie Ann Rya. It was a slow burn friends to lovers romance that was emotional and touching.

Posted July 27, 2021 by sultrysirens in Audiobook, Reviews by Liz / 0 Comments