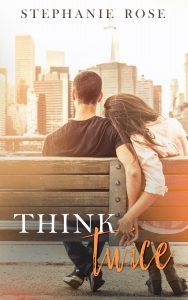 Think Twice by Stephanie Rose
Published by Self on 02/22/2018
Genres: Contemporary Romance
Buy on Amazon US
Goodreads

One couple risks it all, while the other may lose everything...

At eighteen, PJ was full of dreams. She was on her way to becoming a serious artist and moving across the country, away from the unrequited, tortured dream of her much older brother’s irresistible best friend, Dylan. But when she forced herself to let that dream go, she never expected it to bounce back and refuse to let her.

One fall may have cost Jack everything. After being severely injured while responding to a fire, he lost the girl, the use of his leg, and possibly the career he’s dreamed of all his life. While away at rehab, he connects with Danielle, his physical therapist and a girl from his past. She can heal him in more ways than one, but she’s nursing her own wounds.

When your heart is warring with your head, there’s no time to Think Twice.

When your heart is warring with your head, there’s no time to Think Twice.

Think Twice by Stephanie Rose was a nice and unexpected surprise! I was intrigued when I read the blurb, as it indicates this story would follow two different couples and I was curious how that would flow. The author did a great job inter-twisting the two stories. I believe part of the reason this worked so well is two of the character were siblings.

One couple, PJ Garcia and Dylan Matthews. Dylan is her brother’s best friend and she has crushed on him for a very long time, but she is only the annoying younger sister, right? Now at eighteen she feels it times to move forward, because Dylan will never be hers. Dylan knows PJ is too young for him, but can he really let her go?

The other couple, Jack Taylor and Danielle Marsh, knew each other as kids, but have not seen each other in years. When Jack is hurt on the job, Dani is his physical therapist, but before they know it, lines have been crossed. I loved their chemistry from the start. Jack is determined to show Dani what they could be, while Dani is learning to trust again, although slowly.

It was interesting to have four point-of-views and two different, but interconnecting stories happen at once, but it worked for Think Twice by Stephanie Rose. Though each couple’s story was happening at the same time, each was unique and captivating on its own. I loved the characters so much and was drawn in from the very beginning!

$2.99 for a Limited Time | FREE with Kindle Unlimited

To read Chapter Two of Think Twice, head over to Book+Main: 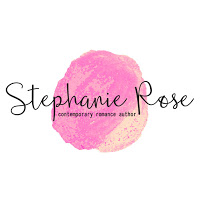 Stephanie Rose is a bad@ss New Yorker, a wife, a mother, and lover of all things chocolate. Most days you’ll find her trying to avoid standing on discarded LEGO or deciding which book to read next.

Her debut novel, Always You, released in 2015 and since then she’s written several more—some of which will never see completion—and has ideas for hundreds to come. 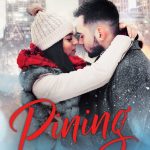 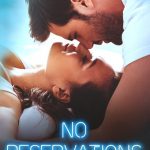