Posted November 20, 2018 by sultrysirens in Reviews by Liz / 0 Comments 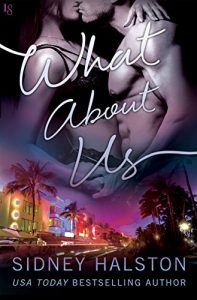 What About Us by Sidney Halston
Series: Panic
Published by Self on 11/20/2018
Genres: Contemporary Romance
Buy on Amazon US | iBooks | B&N
Goodreads

Alex: I hate doing business in clubs. Especially one like Duality. I’m here to seal a deal, not indulge in whatever hedonistic illusion they’re selling. Until, through all the skin and sex on display, I see her. Helen Blackwood. The girl who once filled my youthful fantasies, whose name is now synonymous with pain. Her father’s lies destroyed my family, leaving me with nothing to lose. And yet I can’t deny my electric response to her touch . . . or my urge to protect her when I see the bruise on her face.

Helen: Growing up, life prepared me for society galas and powerful men, not minimum-wage jobs or drunk exes with anger issues. But I’m a survivor. So here I am, practically naked, serving drinks at a Miami nightclub. I don’t mind the stares. Apparently, Alex Archer does. After twelve years, we aren’t exactly friends, but money is something we both understand. Something he knows I need. I’ll be his personal assistant, even if it means working with the man I hate . . . and the man I still want.

What About Us by Sidney Halston is the fourth book in the Panic series, but the first I have read. This was a second chance romance about now enemies-to-lovers. Helen Blackwood and Alex Archer had too much history and most of it bad. When Alex sees Helen at Panic, he thinks this may be the perfect chance for revenge.

Helen broke my heart. She has been through so much, but through it all she was determined to succeed and move forward. Alex is determined to get revenge and was a bit mean and cruel at times. There was so much hurt and anger when Alex and Helen were torn apart when they were younger. Though they want to hate each other, the chemistry and desire they once had is still there.

What About Us by Sidney Halston was an angsty enemies-to-lovers second chance romance with great banter and chemistry. I enjoyed reading this book and look forward to going back and reading the others in the series.

USA Today bestselling author Sidney Halston lives her life by one simple rule: “Just do it.” And that’s exactly what she did. At the age of thirty, having never written anything other than a legal brief, she picked up a pen to pursue her dream of becoming an author. That first stroke sealed the deal, and she fell in love with writing. Halston lives in South Florida with her husband and children.

Posted November 20, 2018 by sultrysirens in Reviews by Liz / 0 Comments