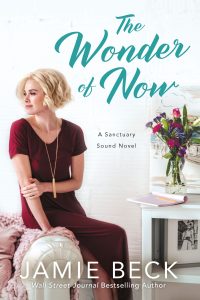 The Wonder of Now by Jamie Beck
Series: Sanctuary Sound
Published by Montlake Romance on 09/10/19
Genres: Contemporary Romance
Buy on Amazon US
Goodreads

Peyton Prescott would give anything for the carefree life she knew before breast cancer changed everything. But instead of using her second chance to move forward, she’s stuck promoting the memoir her brother convinced her to write, thus reliving the very battle she wants to forget. If she hopes her European book tour will allow her to enjoy revisiting her favorite travel-writing destinations, she’s wrong: her PR whiz is too consumed with his own goals to consider her needs.

Mitch Mathis has relied on discipline to achieve his goals, and with his new firm’s success riding on Peyton’s book launch, he must keep her on task. They’re here for business, not pleasure. And Mitch won’t let unbridled desire harm his professional reputation—not again.

When frustrated expectations and attraction throw the tour into chaos, it challenges everything Mitch and Peyton believe about themselves, life, and love, forcing these opposites to consider whether they can embrace the change they need to grow.

The Wonder of Now by Jamie Beck such an emotional story. A woman who wants to move forward and a man who only wants to succeed and keep her in the past. What a heartbreaking and heartwarming story. Peyton Prescott wrote a memoir on her battle with cancer to share with others, but now she wants to live in the present. But her PR rep wants her to give her tour everything she has. This means living with the past over and over again.

Peyton was strong, determined and honest with her struggles. Mitch wanted to do his job and not let anything interfere, but he could not deny his feelings for Peyton. Together they learn more about each other and cannot fight the connection they feel. Their journey was not an easy one and will both gut you and warm your heart.

Title: The Wonder of Now

Throughout my career, I’ve loved the challenge of redeeming a character that might be hard to like, much less love. In Peyton, the heroine from The Wonder of Now, I took on a particular challenge, because most of my readers are women, and most women don’t forgive a friend who betrays them for a man. This setup made redeeming Peyton a singular challenge and begs two questions: who is Peyton, and why should you care about what happens to her?

Peyton Prescott is part of a legendary literary family owing to her great-grandfather’s prolific career as a celebrated novelist. The casual observer would say she’s grown up in a mansion by the sea and enjoyed every privilege (wealth, beauty, wit). But life in Arcadia House wasn’t as picture-perfect as her family would have the public believe, and emotionally distant parents didn’t exactly model warmth or instill a sense of deep love and acceptance. She spent her twenties living out of suitcases and blogging about her travels, then had the misfortune of falling for her childhood friend’s boyfriend, who dumped that friend for Peyton…until she got diagnosed with breast cancer, at which point he dumped her, too.

Facing her mortality alone forced her to take a hard look at her life and her choices, spurring a sincere desire to become a better person, and to make amends with the friend she betrayed. Although she gets diagnosed in the first book in this series, and begins to make amends in the second, this final book is when all the threads come together. She and her famed-photographer brother recorded her journey from diagnosis through her final surgeries, collaborating on a memoir that is about to release (the proceeds of which will be donated to cancer research). Of course, at this point in time she’s more interested in moving on with her life than with reliving the experience with cancer and sharing those intimacies in public forums. Her attitude puts her in direct opposition to the publicist, Mitch, who is counting on her becoming his fledgling company’s big hit.

Despite Peyton’s flaws, of which she is well-aware, she also has strengths that draw people to her. She’s self-deprecating, witty, brave, beautiful, and empathetic. She now also has a heightened appreciation for living in the moment and not taking any day for granted—something the goal-oriented Mitch must learn to do. Although he has very good reasons for being disciplined and focused on his ambitions, he is instantly drawn to her energetic spirit and zest for life.

I confess that I struggled while writing this book, but it ended up becoming my favorite to date. Not just because I loved rising to the challenge I’d set up, but also because Peyton’s musings, fears, and hopes go to the heart of what connects us all, and because I think I gave her the perfect man to help her complete her much-needed personal growth arc. But you can be the judge!

Excerpt: The Wonder of Now

The writer from the Barcelona Review swaggered in and sat down. Medium height, trim, with coal-black hair worn a bit shaggy. The guy’s eyes lit up when he got his first good look at Peyton’s smile, making Mitch’s gut tighten.

“Hello, Miss Prescott. I’m Javier Molina, but friends call me Javi.” He reached across the table to shake her hand.

“Nice to meet you, Javi. Please call me Peyton.”

The little knot in Mitch’s stomach screwed tighter when he thought she was flirting. She’s only smiling, stupid.

Javi set up his phone recorder and then slouched back, feet planted wide apart on the ground, pen in hand. That cocky bastard was trying to intimidate Peyton with his domineering position. “First, let me say I enjoyed the book, although I suspect some of the caustic humor was meant to keep us at a distance.”

“Not exactly,” she muttered.

Javi hesitated but would be disappointed if he expected his silence would force her to elaborate. Mitch had watched her operate with interviewers in Rome. She’d make an excellent trial witness, answering only those questions asked—nothing more or less. Even this spare utterance seemed to have slipped through her fortress wall.

Javi prodded again. “In certain cases, the photographs are more raw than the narrative, although they blend seamlessly together. All but the cover photo, which has no explanation or accompanying exposition. It’s a spectacular, harsh image . . . Can you tell our readers what was going through your mind when it was taken?”

“You mean aside from ‘I’m going to kill you, Logan’?” She chuckled, buying herself a precious moment to compose her thoughts, Mitch guessed.

Meanwhile, Javi raised his index finger with a sly nod, as if she’d proved the point he’d made a moment ago about her defense mechanism. Rather than venture another attempt to flirt his way past Peyton’s defenses, Javi simply stared at her this time, waiting for a real answer.

Her gaze drifted, eyes cloudy. If she’d wanted to discuss whatever happened at the time of that photo, she would’ve put it in the memoir.

Mitch loosened his fist and wiggled his fingers. She needed to do this for herself, and it might be easier on her if he left the room. It would certainly be easier on him not to listen to the story behind the photo that had captivated yet haunted him for weeks.

He wrestled with his internal debate until she sighed.

Without looking at Javi, she picked up the pen and began doodling on the pad in front of her while she spoke. “Forty-five minutes before Logan shot that photo, I’d used the magic mouthwash to help with my mouth ulcers. After the waiting period, I went to the kitchen to get some water. It was predawn, so I’d assumed Logan was sleeping. I took a few sips and then wandered to the living room window. Outside, the street was already coming to life, all shadows and movement and secrets. Garbage men emptying bins, night-shift workers heading home, a stray woman dashing toward the subway on an obvious walk of shame . . . ordinary people living their lives. Probably worrying about the electric bill, or looking forward to a sporting event, or maybe daydreaming about a new love. Things that had once occupied my thoughts but, in that moment, meant less than nothing to me.”

When she paused, Mitch stole a look at her notepad. Daisies?

Her expression shifted to something self-deprecating. “And yet I envied them and those small worries . . . envied their health. Their nonchalance about another new day. I was so separated from it all—and not only by the glass. I swallowed a scream because I knew they, like me before my diagnosis, were taking everything for granted. I watched them, resentment festering because I might not exist long enough to even see those people months later. Worse, they’d never know. Life everywhere would go on without me, and very, very few people would care. Just like that”—she snapped her fingers—“it hit me that my whole life never mattered much. No spouse. No children. No impressive legacy from my Globejotter days. What, of value, had I done with my time?”

The room remained silent while she resumed her doodling. “I don’t know what woke Logan. All I remember is that I turned when I heard the camera click, and then he kept snapping.” She finally looked at Javi and tapped the book jacket with the back end of her pen. “That was his favorite of the bunch.”

Javi straightened his posture while finishing his notes. Peyton shot Mitch a quick glance punctuated by a half shrug. What a strange, intriguing woman. Drawing flowers while relaying her existential crisis to a total stranger.

Mitch offered a sharp nod of approval when what he wanted was to gather her in his arms like a bouquet of delicate flowers and tell her that he would care very much if she didn’t exist tomorrow or the next day or the one after. 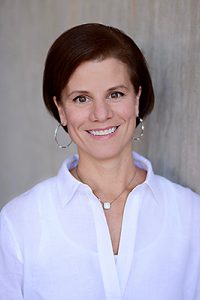 National bestselling author Jamie Beck’s realistic and heartwarming stories have sold more than two million copies. She’s a Booksellers’ Best Award and National Readers’ Choice Award finalist, and critics at Kirkus, Publishers Weekly, and Booklist have respectively called her work “smart,” “uplifting,” and “entertaining.” In addition to writing, the author of the Cabot novels, the Sterling Canyon novels, and the St. James series enjoys dancing around the kitchen while cooking and hitting the slopes in Vermont and Utah. Above all, she is a grateful wife and mother to a very patient, supportive family.

Fans can learn more about her on her website, www.jamiebeck.com, which includes a fun “Extras” page with photos, videos, and playlists. She also loves interacting with everyone on Facebook at www.facebook.com/JamieBeckBooks.