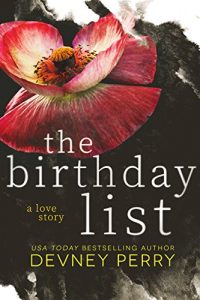 The Birthday List by Devney Perry
Published by Self on 04/03/2018
Genres: Contemporary Romance
Buy on Amazon US | iBooks | Kobo | B&N
Goodreads

Happily married to her college sweetheart, Poppy lived a blessed life with the husband of her dreams. Then everything changed. She is no longer a wife. She is no longer the envy of her single friends. Now, people look at her with pity as they whisper a single word behind her back.

Years after her husband’s tragic death, years of pain and sorrow and wishing for the life she’ll never get back, Poppy decides to finish Jamie’s birthday list. She’ll do the things he wanted to most. Because maybe, just maybe, if she can complete his list, she can start to live again.

Poppy expects going through the birthday list will be hard. She expects it to hurt. But what she doesn’t expect is Cole. Could the man who delivered the news of her husband’s death and shattered her heart be the one to help her put it back together again?

I have no words for this book. I struggled with hoping to give it the justice it truly deserves. The Birthday List by Devney Perry was an emotional, heartbreaking and heart-warming book about second chances. The blurb pretty much tells you this, but the story that Devney Perry gives was beautiful, devastating and touching.

Poppy could not be happier. Married to the love of her life, they were happy, fulfilled and ready for their future together. Then one-night changes everything. Her husband is gone, and she is left devastated. She could not imagine a life without him. Now five years later she is still reeling lost. My heart just broke for her.

Cole could not have been more perfect. When he broke the devastating news to Poppy, he saw her strength. When he runs into her again years later, he is drawn to her and determined to get to know her. He was so patient and caring. Letting her go at her own pace.

Poppy has not been able to move on. Struggling, she decides to compete Jamie’s birthday list in hopes of giving her some kind of closure. When she runs into the man that broke the horrible news to her, she cannot deny the feelings he evokes. Yet somewhere he seems to become a part of her life. Feeling guilty, Poppy is torn between opening her heart to Cole in fear of forgetting the man she once loved. Could she allow herself this second chance before it is too late?

I have never read Devney Perry before, but trust me, I am planning on resolving this soon! Her words were just beautiful.  This story was absolutely amazing. I loved the characters so much and their journey. I was consumed by this story from beginning to end and is one I would highly recommend!

Turning to the door, I smiled, ready to greet my late-evening customer, but faltered as the door closed behind him.

Cole Goodman was walking my way.

My belly dipped as I took him in. His aviator sunglasses were perched on top of his chocolate-brown hair. A black polo stretched across his broad shoulders and pulled tight across his muscled arms. His pale-blue jeans molded to his Herculean thighs before draping down to his black, square-toed boots. The leather belt on Cole’s trim waist held both a shining badge and a holstered gun.

Cole smiled and locked his light-green eyes on mine as he crossed the room.

His straight, white teeth made my breath hitch—something that had happened last night more times than I wanted to admit.

Molly, who had turned around from her seat to greet our customer, spun around so her back was to Cole. Her cheeks flushed as she whispered, “Wow.”

He could give a woman a speeding ticket and get a thank-you in return. He inspired women to attempt push-ups in a karate class just for the chance to watch him sweat through his gi. Cole made grown women blush like teenagers and giggle in corners, like those girls at the dojo last night.