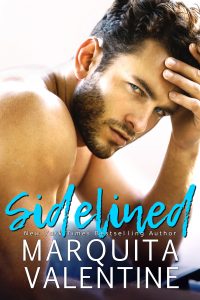 It was supposed to be the happiest time of my life.
And it was, until my husband left me.
On our honeymoon.
For the wedding planner.

Now all I want to do is get over the humiliation with the one man I shouldn’t.

Except he's avoiding me at all costs.

But I'm not going to let Aiden McHugh get away. He might be the hottest quarterback in the NFL and my older brother’s best friend, but he doesn't intimidate me. He promised to help me and I’m holding him to it… even if it means I have to convince him one seduction at a time.

Until the seduced becomes the seducer.
I no longer want to get over my ex; I just want Aiden.

Sidelined by Marquita Valentine was such a cute and charming read with just a touch of angst. The story was funny, steamy and included a very sexy, confident, alpha sports athlete.

Layton had her entire life planned out from the age of nine. She knew what she wanted, and nothing was going to stand in her way. It all seemed to be going according to plan, until her husband left her, on their honeymoon, for the wedding planner. Now all she feels is humiliation.

Aiden McHugh only ever saw Layton as his best friend’s little sister, until he didn’t. One day he saw Layton, really saw her and knew he would never be the same again. But Layton’s plans did not include him. So instead he put up a tough and cocky exterior and pushed her away, but he never stopped hoping.

Sidelined by Marquita Valentine was such a charming read. Layton and Aiden are very likable characters, even when they are frustrating! As Layton begins to move forward from her heartbreak, she begins to see Aiden in a new light, but not in a serious way. Aiden, on the other hand, wants all of Layton or nothing. Can they find a way to each other before it’s too late?

Sidelined was a very enjoyable sports romance that was easy to get lost in. I liked the story, characters and writing. Layton and Aiden had a lot of chemistry, even when they were not together. This was definitely a fun and light read that that will draw you in.

Shocked doesn’t even begin to describe how I feel when I see Layton standing outside, wearing a large coat… and is she holding pom-poms?

After another insistent pounding on the door, I stride to it, yanking it open. “What the hell are you doing at my house? And who let you the fuck in my neighborhood?”

“I gave the guard my brother’s name and said I was taking important papers to you.”

Throwing off the coat, Layton beams at me and puts her hands on her hips. “I came over to S-E-D-U-C-E you!”

My jaw drops and gets stuck to the floor. “You what?

Her brow furrows. “Did I spell seduce wrong?”

I look around, half-expecting that at any minute, someone with a camera phone will jump out at us and yell just kidding, because there’s no way in hell Layton Price should be on my doorstep wearing a cheerleading outfit and shaking her pom-poms at me.

Well, she hasn’t shaken them yet, but her tits are about to pop out of her top, and the skirt… the skirt leaves little to the imagination. Swear to God, with a faster turnaround, I’ll see her ass cheeks hanging out.

She rolls her eyes. “I came here to seduce you.”

“Wearing that?” It’s not usually my thing, but…

“Should I shake my pom-poms for you first?”

Hell yes, you should. “No. Put your coat back on.” I bend over and pick it up, then place it around her shoulders. “You need to go home, LT.”

She juts out her bottom lip. “My Uber already left.”

“Come on, Aiden,” she pleads, batting her lashes at me and letting the coat slide down her hot little body. “It’s cold outside.”

“Should have thought about that before you put,” I wave my hand at her, “that on.”

“I wore it just for you. The top’s too tight, though.” As if to torture me, she started bouncing up and down on the balls of her feet. “Oh, wow. I can’t believe the girls are staying put.”

Me either. “Good for them.” I try to shut the door, but she shoves a pom-pom in at the last minute. “Damn it, LT. I said go home.”

“You can’t leave me outside when it’s cold like this.”

Better than me taking advantage of her like this. “I’m not a gentleman, baby girl.”

“You don’t have to be a gentleman to be a decent person,” she points out. “And stop calling me baby girl. I’m neither one of those.”

She’s right. “Get your ass in here. You can wait in the foyer while I get an Uber for you.”

Pushing her way in, she grins and spins around, stumbling a couple of times in the process. “What do you think of the outfit? Be honest.”

Marquita Valentine is the New York Times and USA Today Bestselling Author of the Holland Springs and Boys of the South series.

Since first taking the plunge in July of 2012 to self publish, Marquita Valentine has appeared on the Top 100 Bestselling Ebooks Lists on iBooks, Amazon Kindle, and Barnes&Noble. She’s been called “one of the best new voices in romance” (Guilty Pleasures Book Reviews) and her books have been accused of being “a sexy, fun, and slightly addicting contemporary read” (The Book Queen).

When she’s not writing sexy heroes who adore their sassy heroines, she enjoys shopping, reading, and spending time with her family and friends. Married to her high school sweetheart, Marquita lives in a seriously small town in the south with her husband, two kids, and a dog.