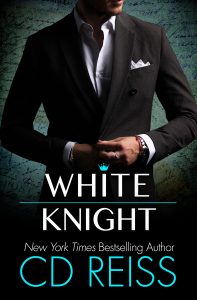 Catherine's long-lost love is found.
Catherine Barrington is a rich girl. Chris Cartwright is a poor boy.
He left her to make something of himself. A man she could be proud of. A man she could bring home to her parents. A man she could marry.
On the trading floor he became the man he knew he could be. Now, it’s time to return.
Rich girl.
Poor boy.
She didn’t care about his money, but he didn’t believe her. Soon after he left, all the money was gone.
Her life is hell.
Now he’s back, and he’s different. Pristine. Gorgeous. Rich.
Rich boy.
Poor girl.
Money was never the barrier, until now.
----
White Knight is a standalone in the same world as King of Code, with its own beginning, middle, and end. You don't need to read anything else to read White Knight.

We first meet Catherine in King of Code, where she is portrayed as an very sweet, helpful woman but yet you don’t quite understand the painstaking sadness that has a hold on her until White Knight.

White Knight is the story of Catherine and Christopher, where we get a full understanding of their past together which leads to whether or not they can have a future with one another.

I was quite taken with this couple and their love for each other as innocent teenagers and how Christopher stayed true to his word. I fell in love with Catherine and Christopher’s intense second chance romance and enjoyed the subtle little touches of love that had so much meaning to the story.

CD Reiss is a New York Times bestseller. She still has to chop wood and carry water, which was buried in the fine print. Her lawyer is working it out with God but in the meantime, if you call and she doesn’t pick up she’s at the well hauling buckets.

Born in New York City, she moved to Hollywood, California to get her master’s degree in screenwriting from USC. In case you want to know, that went nowhere but it did give her a big enough ego to write novels.

She’s frequently referred to as the Shakespeare of Smut which is flattering but hasn’t ever gotten her out of chopping that cord of wood.

If you meet her in person, you should call her Christine.