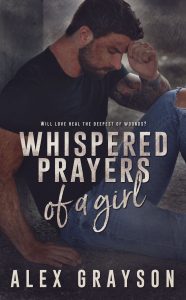 Whispered Prayers of a Girl by Alex Grayson
Published by Self on 07/10/2017
Genres: Contemporary Romance
Buy on Amazon US | Buy on Amazon UK | Audible | Kobo | Google Play
Goodreads

A lonely man, a widowed woman, a carefree boy, and a broken girl… Can the four come together and help heal each other? Or will fear of the unknown and guilt of the past keep them apart?

Her whispered prayers break her...

At night, as she’s drifting off to sleep, I press my ear to the door and listen to her heart-wrenching pleas. Her words are agony to my healing heart, but I cherish the sound of them, for that’s the only time I ever hear my beautiful daughter speak. Since her father died two years ago, she’s grown quiet and withdrawn. Cat’s Valley was to be our new beginning, a place where my family and I can heal, but what we find there is so much more.

Scars mar his body. Pain has left him in pieces…,

Four years ago, I lost the two things I cherished most in the world. They were ripped from my arms in the most painful and cruel way. Since then, I’ve kept to myself, preferring to stay away from the pitying looks and murmured rumors. Everything changed when she and her children barged into my life. It was an accident, and I don’t deserve them, but now that they’ve stepped into my life, I’m not sure I can let them go.

*This book is intended for mature audiences, ages 18+. It may be enjoyed as a standalone!

Whispered Prayers of a Girls was a beautiful and emotional story of second chances. It touched my heart and will be with me for a long time. A man who lost everything and a family who is damaged and grieving. Could they be just what they need to move forward?

Alexander lives with guilt and loss that suffocates him on a daily basis. Cutting himself off from everyone and everything, he prefers to suffer alone. Barely existing, he has no idea how to forgive himself, much less move forward. He is so moody and shattered. He does not feel he deserves another chance.

Gwen needed a fresh start for her and her kids after the unexpected death of her husband. Her children lost their father and though her son seems to be doing okay, her daughter is suffering deeply. Daniel was so sweet and will have you smiling. Kelsey, on the other hand, has not spoken since the death of her father. At a loss, Gwen is patient with her in the hopes to one day hear her speak again.

Than a chance meeting changes everything. The last thing Alexander wants is letting people in, but when Gwen and her kids need help, he steps in. Though Alexander wants nothing to do with them, there is a kindred connection between Alexander and Kelsey that will touch your heart.

This book is very emotional and heartbreaking. Both Alexander and Gwen suffered great losses and struggled to move forward. The slow burn romance between them was so sweet. Both struggling so much. And Gwen’s children were amazing. This book will grab your heart and hold it to the very end.

Whispered Prayers of a Girl by Alex Grayson is LIVE!!!
And it’s available on your favorite platform!

Exclusive excerpt from the pages of Whispered Prayers of a Girl:
“I don’t deserve you. I don’t deserve whatever could happen between us.” I want to object, but he continues before I get a chance. “But there’s something I want more than my self-loathing for wanting something I shouldn’t.”

“A chance to know what it feels like to kiss you.”

AS PART OF THE RELEASE MADNESS YOU COULD WIN A PRE-LOADED KINDLE FIRE!

Alex is giving one lucky reader a brand new, pre-loaded Kindle Fire! Included in this amazing giveaway is a copy of Whispered Prayers of a Girl and OVER 100 MORE STORIES FROM AN AWESOME LINEUP OF AUTHORS!

Alex Grayson is the bestselling author of heart pounding, emotionally gripping contemporary romance including The Jaded Series, The Consumed Series, and two standalone novels. Her passion for books was reignited by a gift from her sister-in-law intended to distract Alex and help her pass the time while her husband was away for work. After spending several years as a devoted reader and blogger, Alex decided to write and independently publish her first novel in 2014 (an endeavor that took a little longer than expected). The rest, as they say, is history.
Originally a southern girl, Alex now lives in Ohio with her husband, two children, two cats and dog. She loves the color blue, homemade lasagna, casually browsing real estate, and interacting with her readers. Visit her website, www.alexgraysonbooks.com, or find her on social media! 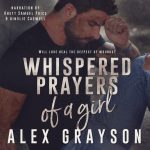 Audio Review: Whispered Prayers of a Girl by Alex Grayson 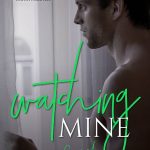