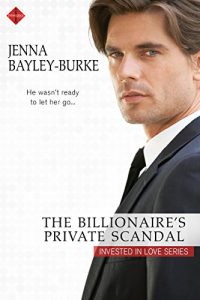 Megan Carlton’s secret affair with financier Brandon Knight ended when he pulled off a hostile takeover of her family’s hotel empire and then kissed another woman. Broke and alone, Megan starts a new life and learns to stand on her own, then Brandon finds her serving coffee and surviving on tips and tries to pull her back into her old life and his arms. She thought she was over him, and she certainly can’t ever trust him again. But what her head knows and her heart feels are two different things.

Brandon was used to always getting what he wanted, then the woman he loves disappeared without a word. When he finds her months later working as a barista, he wonders if she’s suffering from amnesia. Getting a scalding Americano to the chest proves she recognizes him, but she’s got the situation—and him—all wrong. Now all he has to do is prove it.

The Billionaire’s Private Scandal by Jenna Bayley-Burke was a quick read with an intriguing story. A fallen socialite and a billionaire in love and so many misunderstandings and secrets, what can go wrong, right?

Megan Carlton had everything she wanted in life. A secret affair with a sexy billionaire, money and status. She never wanted for anything. Then her world fell apart and when she ran to the man she thought she could always count on and instead lost the little bit she had left.

All Brandon Knight ever wanted was Megan. Their secret affair suited him fine, until it didn’t. Determined to have her, he put a plan in place to protect her, but instead it blew up in his face. But he loved her and was determined to protect her at all cost. All he had to do was find her.

Though I liked Megan and Brandon, communication would have gone a long way between these two. When we meet Megan, she was at her lowest. Having lost everything after the man she loved did a hostile takeover of her family’s business and kissed another woman, all in the same day. She is broke and barely surviving. But she is determined to move forward and continue the charitable legacy her grandmother founded. Though she struggled on a daily basis, her determination pulled her through.

Brandon is a man accustomed to getting everything he wants. He is a fair man, sexy, charming and caring, but determined just the same. When the woman he loves disappears, all he wants is her back in his life. However, when he finds her, it’s at the last place he ever imagined and not the welcome he imagined.

Brandon and Megan never stopped caring about each other, however, so many misunderstandings and secrets got in their way. Hurt, broke and heartbroken, Megan ran away from her life to survive. Brandon only wanted to protect Megan, but not understanding how his actions may look, he drove her away instead. Can they find a way back to each other or is there to much hurt and secrets between them now?

This was a great quick read. I read this in one sitting. I loved the banter and friction between the two main characters. Neither was willing to budge, but both cared too much to let go. The push and pull, throughout the story will keep you invested and rooting for them.

Jenna Bayley-Burke is known for her fun, sexy romance novels, baking banana bread, and over-volunteering. She thinks she has the best jobs in the world – mother, wife, and author. When she’s’ not lost in her latest story, she can be found pursuing whatever hobby her characters are enamored with – photography, yoga, shoes, gardening, crafts, and cooking up a storm.