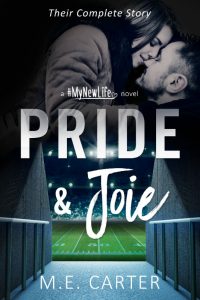 Joie Stevens put all her dreams on hold the day she became a mom. As a
natural caretaker, it never bothered her. But now that her son is grown, she
has some new goals in sight and nothing is going to get in her way.

Except maybe an attractive football coach. Who very literally gets in
her way.

As assistant football coach for the Flinton State University Vikings,
Jack Pride really has nothing to complain about. He has a job he loves and
friends he enjoys. Certain he had his one true love in his late wife, the last
thing on his mind is dating.

Until he runs into a beautiful non-traditional student. Who he very
literally runs into.

This three-part story reminds us love can be better the second time
around. And that it’s not just players in the game…

I absolutely love this story! Jack Pride and Joie Stevens are both in their 40’s when they meet. Joie, the single mother of a college student who has decided to go back to school and Jack, the football coach who happens to coach Joie’s college age son. It was interesting to see how Jack and Joie’s son, Isaac, try to make a relationship between them work.

I loved all of the characters, the storyline and the fact that these characters are not the typical 20-30 somethings that you typically read about. A widowed man who falls in love with a single mother of a college age son. M.E. Carter writes real life…and I really love it! 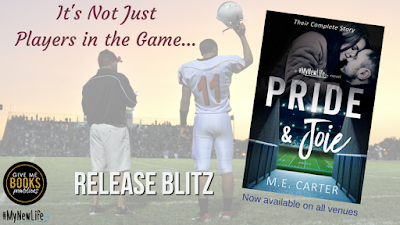 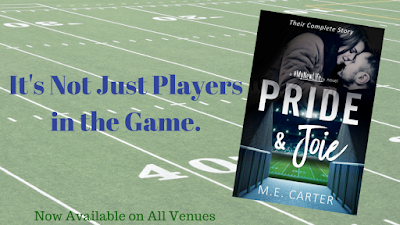 Purchase Links
$2.99 for a limited time
AMAZON US / UK / CA / AU
B&N / KOBO / iBOOKS
Author Bio
Mother, reader, storyteller—ME Carter never set out
to write books. But when a friend practically forced a copy of Twilight into
her hands, the love of the written word she had lost as a child was rekindled.
With a story always rolling around in her head, it should come as no surprise that she finally started putting them on paper. She lives in Texas with
her four children, Mary, Elizabeth, Carter and Bug, who sadly was born long
after her pen name was created, and will probably need extensive therapy
because of it.
Author Links
FACEBOOK PAGE
FACEBOOK PROFILE
CARTER’S CHEERLEADERS
FACEBOOK READER GROUP
INSTAGRAM