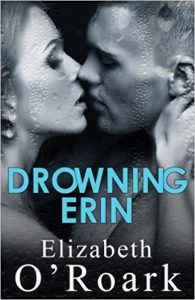 Drowning Erin by Elizabeth O'Roark
Published by Self on 11/09/2017
Genres: Contemporary Romance
Buy on Amazon US | Kobo
Goodreads

Erin Doyle can’t stand man whores, and she particularly can’t stand Brendan Langstrom — the guy who avoids relationships like the plague and never sleeps with the same girl twice. She and Brendan have waged a war of mutual disdain for years, but when Brendan picks up the pieces after Erin's world unravels, they’ll both be forced to admit that beneath their dislike is something else entirely — something they’re not supposed to feel. Because Brendan isn’t just her nemesis … he’s also her fiance’s best friend.

KU Subscribers, this one is #FREE for you!!!

Drowning Erin by Elizabeth O’Roark was my first read by this author, but will not be my last.  I was consumed from start to finish with this emotional enemies-to-lovers romance.

For all accounts and purposes, Erin Doyle seems to have the perfect life.  But no one really seems to see the real Erin. They do not see her wants and struggles. She has learned to hide herself very well and instead of fighting for what she wants, she is settling for what is safe. But she’s on the brink of breaking down. Her first instinct is to do for others before herself, carrying the weight on her shoulders for everyone else.

Brendan has always tried to hide his feelings for Erin. Throughout the years, miscommunication and misdirection has led Brendan and Erin down a path of being enemies of sort. Brendan has been gone for a long time, but now he is back and the more time he spends with Erin, the more he sees what no one else does. But Erin now belongs to his best friend, her fiancé.

The build-up in this story just about killed me. Brendan and Erin have a love-hate relationship we learn through dual point of view and past and present retelling. At times I wanted to hit Brendan, but could also see his internal struggle. And now Erin is set on a certain path, but he sees her struggles and wants to be there for her. But where can it all lead when she belongs to another?

Drowning Erin was an emotional journey. The push and pull between Brendan and Erin was frustrating, but relatable as we learn their story. And when it is time to make a choice, what will Erin choose? This story was angst-filled and full of unexpected twists, but it is one worth the ride! I look forward to reading more from this author!

“Drowning Erin is the read I’ve been searching for, but had no idea I was trying to find.” – Isha, Amazon Reviewer ★★★★★

“I could feel the angst, the dilemma, oozing out of the pages. Poor Erin; I wanted to both hug her and shake her at the same time.” – Lisa, Goodreads Reviewer ★★★★★

“Oh the angst!! This book was so wonderfully written, I don’t know if I can recommend it enough!!” – Heidi, Goodreads Reviewer ★★★★★

Elizabeth O’Roark is a former medical writer who lives in Washington, DC with her three children. She is an avid runner when able to escape the aforementioned children. She drinks an embarrassing amount of Diet Mountain Dew, and would exist entirely off of candy corn were it socially acceptable to do so.