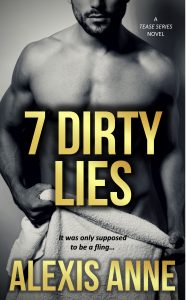 It was right out of one of my movies:
Tropical island, sexy single man, two hot nights of nameless passion.

Except instead of falling into each other's arms, we went our separate ways, never to be seen again.

Of course I thought about him all the time. The way he laughed, the way he saw right through me, the way he took no shit as his strong hands roamed my body. If there was one night I could repeat, it would be that one.

I never expected to see my mystery man again.

Fast forward to my new movie set and the handsome property owner. Yep, same guy. Same sexy, sexy guy. Our chemistry is still off the charts but there’s one tiny problem: he doesn’t trust me.

Okay, so I skipped a few important details. I don’t blame the guy. But they were just little white lies. Unfortunately if I want that movie-perfect ending I’m going to have to set the record straight...and hopefully have a little fun in the process.

7 Dirty Lies by Alexis Anne was a great read. Though this is a part of a series, this is a standalone. Just like the movies! Two people meet during a tropical getaway and their chemistry is off the charts. They agree to enjoy the time they have and move forward. The last thing either expected was to meet again and have their white lies exposed!

Things have been stressful as of late for Lily, so she heads to a tropical getaway. Just what she needed. I really liked Lily. She was smart, strong and so feisty. Colt works hard, but forgets to play as well. So off he goes to his tropical getaway. He does not trust easy, so when he meets a woman he connects with him, he jumps right in. Colt did not trust easy, but he was strong, determined and cared deeply for those in his life.

When these two meet just before the end of their vacations, the chemistry is hot and steamy. Both throw caution to the wind and enjoy each other during the time they have left. At the end, they each go their separate ways. But when they end up working in close proximity, they are both shocked to learn they were not completely honest. Could they find their way back to what they had before?

Once in the real world, Lily and Colt struggle to find their way and so many obstacles stand in their way. I enjoyed reading their journey. This was a fun read with steamy scenes and characters you root for.

Former archaeologist Alexis Anne (who also writes romantic suspense as Alexis Sykes) has worked as an oral historian, GIS specialist, field archaeologist, college professor, and small business owner, before deciding that working from home and writing books was a lot more satisfying. She writes steamy, sexy romance with one half of her brain and romantic suspense, action adventure, and children’s books with the other half.
Growing up she traipsed through the islands of the Gulf Coast, camped in the Everglades, dove the Keys, and generally felt more at home spending her days outdoors with a good book. She currently lives in a home filled with wild men (otherwise known as her extremely extroverted husband, The Sexy Editor, and their two kids), a husky, and a superhero guinea pig.