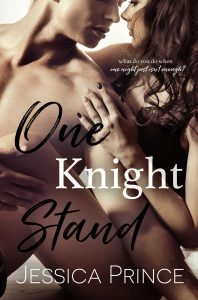 Sutton Briar has lived the past several years doing everything in her power to remain invisible. Boxy skirts?
Oversized tops in muted colors?
Yes please!
She learned the hard way that gaining the attention of the opposite sex could lead down a very dangerous path. She’s content to blend in with the wallpaper, but then her boss makes a request she can’t refuse for fear of losing her job.

Pretend to be the girlfriend of legendary musician, Camden Knight.

There’s just one problem. She can’t stand him… and the feeling is mutual.

Camden Knight spent years burying a crucial part of himself from the public eye. But when a one-night stand gone horribly wrong blows the lid off his secret, the only hope of repairing the damage to his reputation comes at the hands of a woman he despises.

They’re complete opposites in every way, but what starts as a fake relationship quickly turns into something neither of them expected. And what was supposed to be only one night leaves them both wanting so much more.

One Knight Stand is the story of Camden who needs a complete image overhaul after a one night stand gone public. A girl next door is needed to clean up his image and Sutton, the assistant of Camden’s best friend, fits the bill.

Camden and Sutton were two totally different people, not at all who I would think would end up together. Slowly, but surely, the lines blur and the relationship between the two becomes something real. There were a few twists and turns that caught me off guard in the story and I was surprised. However, the only thing I did not like was the overuse of the nicknames, especially during sex.

Overall, it was a good story and I enjoyed it in one sitting!

What do you do when one night just isn’t enough?

One Knight Stand, an all-new standalone contemporary romance by Jessica Prince is Live!