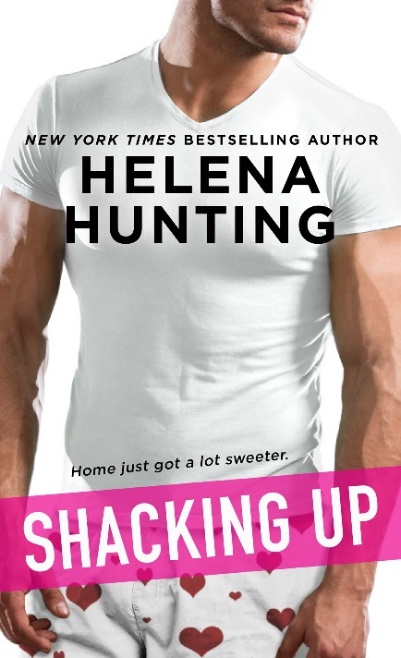 They say every cloud has a silver lining, but does that include missing your big acting break because of a bad cold? Maybe, if being actually sick turns into being lovesick. From New York Times bestselling author Helena Hunting, SHACKING UP (St. Martin’s Paperbacks, November 27, 2018, $7.99), is a hilarious, swoon-worthy novel about sex and the city—and everything in between.

Ruby Scott is months behind on rent and can’t seem to land a steady job. She has one chance to turn things around with an important audition. But instead of getting her big break, Ruby gets sick as a dog and ends up with her tail between her legs. All thanks to a mysterious, gorgeous guy who kissed her—and then coughed on her—at a party the night before.

Ruby’s BFF might have found her the perfect job opportunity: pet-sitting in the lavish penthouse apartment belonging to hotel magnate Bancroft Mills. But when the newly-evicted Ruby meets her jet-setting employer, she realizes he’s the same guy who got her sick. Seeing his role in Ruby’s dilemma, Bane offers her a permanent job as his live-in pet sitter until she can get back on her feet . . . and maybe back into his arms?

I eat an entire Listerine PocketPak on the subway ride home to kill any lingering germs in my mouth from Awesome Kisser. I’m annoyed by the whole thing, but at least he apologized and seemed sincere about the accidental tongue invasion. Too bad the hotness of the memory is marred by raging Brittany and the hack in the face.

After getting home, I rinse with mouthwash, down six vitamin C capsules and some anti-flu holistic stuff, and then I go ahead and make myself my customary before- bed, pre-audition nighttime drink of hot honey-lemon water, and pray I’ve done a good enough job of ridding myself of cough germs.

I climb into bed, note my sheets lack a fresh scent, question when I last washed them, then I set my alarm and close my eyes. Behind my lids appears the hottie— whose name is apparently Banny, or maybe I misheard and it’s Danny. It’s not really a hot guy name. I’m going to stick with Awesome Kisser.

Now that I’m past the shock-and-awe factor I can fully appreciate that man’s hotness in the shouty caps sense of the word. It’s unfortunate he dates vapid, self absorbed model-y types and not starving artists. I have a feeling “date” isn’t the appropriate word anyway. It’s also unfortunate that he has poor coughing manners.

I consider that he was likely a guest at the engagement party and he very well may be a guest at the wedding as well. If I’m still dateless by then he could make an excellent potential dance partner, depending of course on how tight he is with Armstrong. If they’re close friends I don’t think it’s advisable to get involved in any semi- unclothed dancing outside of the wedding celebrations, no matter how hot he is. I don’t want to run the risk of encountering him again should things not go as well as one hopes.

Eventually I stop fantasizing about what’s under his suit and pass out.

I’m about to find out exactly what’s in Awesome Kisser’s designer pants when a repetitive, annoying sound distracts me. I pause just before I smooth a hand over the amazingly prominent bulge while he tilts my head back, his soft lips brushing mine, his hot tongue sweeping . . .

I reach for the phone, remembering that Amie promised me a morning call, just in case I messed up my alarm, which has happened in the past. I was on the ball last night, though. I set three alarms, all within five minutes of each other so I wouldn’t have an opportunity to fall back asleep.

“Rise and shine, Ruby! I’m your wake-up call!” How she manages to sound so damn chipper at seven-thirty in the morning after her engagement party is beyond me.

A seal-like bark comes out when I attempt to grumble hello and tell her off for interrupting my dream.

I make a second attempt at speaking but all I manage is another bark.

“Do you have a bad connection? I told you not to go with the cheap provider. You know how terrible the reception is.”

I clear my throat and immediately regret it, as it feels like knives are traveling up my esophagus.

“Ruby?” Amie asks again and then sighs. “I’m hanging up and trying again.”

Once the line goes dead I immediately hit the video call. Amie picks up right away. She’s wearing a white robe with her wavy hair pulled up into a ponytail, looking as fresh as baked bread out of the oven. I on the other hand, look like yesterday’s garbage based on the small image in the corner of my phone.

I motion to my throat and shake my head. I give speaking another shot, just in case my inability to make more than random, audible sounds is a result of waking up. I usually don’t have to use words until after my morning coffee. All I get is another one of those squeaky moans and more sharp pain in my throat.

Amie sucks in a gasp and slaps her hand over her mouth. “You have no voice!”

“How are you going to audition?”

The final dregs of sleep slip away. I mouth oh God. A mime is the only part I can audition for with no voice, or one of the dancer roles with no lines. They don’t make nearly as much money as central, or even secondary character, roles—which is what I’m hoping to score. The pay scale for that is far higher than for a lineless role. It definitely won’t cover the basics, like rent and food, let alone the minimum payments on my credit card. I’ve been banking on this audition to get me out of the hole I’ve dug for myself over the past few weeks.

The phone conversation is pointless since Amie can’t read lips and I can’t respond. She tells me she’s coming over. I try to tell her not to bother, but again, with the lack of words it’s impossible to convey. I wait until she hangs up and text her to tell her it’s not necessary. Besides, this thing I have is clearly contagious since I must’ve gotten it from Awesome Kisser, and I don’t want to pass it on to her. Damn Awesome Kisser—ruining the already questionable state of my life.

I roll out of bed, the full-body ache hitting me with the movement. I must be dying. And I’m not just being dramatic. Every cell in my body hurts. I drag myself to the kitchen and fill the kettle. Maybe a lemon-honey hot water toddy will help restore my voice. Based on my re- cent unlucky streak, I have my doubts.

I shuffle to the bathroom, turn on the shower, and root around in the medicine cabinet for some decent drugs. All I have is regular strength Tylenol, so it’ll have to do. I climb into the shower without checking the temperature first it takes forever to heat up and then fluctuates between lukewarm and scalding. I step under the spray during a scalding phase and huddle in the corner until it’s bearable.

I’d like to say the shower helps me feel better. It does not. The warm water also does little to help my voice. Although I’m past just squeaking to barely audible one word phrases, such as “ow.” I’m praying to the voice miracle gods that the honey lemon combo will further improve my ability to speak.

Once out of the shower I doctor up my water, adding extra lemon and honey. Not only do I burn the crap out of my tongue, it feels like serrated blades coated in acid sliding down my throat. Still, I get dressed in basic black tights and a black tank with a loose, gauzy gray shirt over top. I dry my hair and put on makeup in hopes that appearing put together will make it so. I have to double up on powder when the effort to prepare my face causes me to sweat.

I take a second hot lemon honey toddy with me on the subway and arrive for my audition half an hour early. Not that my promptness matters. I’m still unable to speak above a whisper. My despair balloons like a marshmallow in the microwave at the mass of people performing voice warm up exercises around me.

I make an attempt to do the same, but the hoarse, croaklike sound is drowned out by the crystal clear voice of the perfectly gorgeous woman standing next to me. As I listen to the sound of a thousand soaring angels spew out of her mouth, I shiver with what I fear is the beginning of a fever. Sweat breaks out across the back of my neck and travels down my spine, along with a violent shiver. As if today could be any worse than it already is, my stomach does this weird, knotting thing.

I glance at the director, who’s thankfully still looking fresh, and not beaten down by hundreds of craptastic auditions. Those are yet to come. I shoulder my bag and follow him to the theater.

“You’re auditioning for the role of Emma today, correct?” He doesn’t give me a chance to confirm. “I’d like you to start with the song at the beginning of act two.”

“Okay,” I croak feebly, cringing at the raspy sound. At least I can speak, even if I sound like a prepubescent boy with his nuts caught in his zipper.

The director looks up from his clipboard, his frown an omen.

“I seem to have lost my voice.” He has to strain to hear me.

He heaves a frustrated sigh. “You can’t audition if you don’t have a voice.”

“I didn’t want to miss it. Maybe I could audition for a dancer part?” Fewer words are better.

He purses his lips. “Auditions for dancer roles aren’t until later in the week.”

“I understand, but I’m here and if you can’t hear me sing, at least you could see me dance?” I fight the gag reflex as another wave of nausea hits me.

He sighs and relents, gesturing to the stage. I thank him, then drop my bag at the edge of the stage and get into first position. My brain is foggy and my body aches horribly, but I can’t pass up this opportunity for a modest, yet steady income for a few months. I can’t afford to rack up additional credit card debt, and I don’t want to ask my father for more money, because that will make him aware of how much of a struggle this is. Then he’ll make his case for me to come work for him, as is his master plan. I know I can do this.

The music cues up, and as I start to move my stomach does that rolling heave thing again. There isn’t any food in it, but all of a sudden the honey lemon water I consumed this morning decides to stage a revolt. I’m in the middle of a spin not the best idea when nauseous and the next wave hits me; violent and unrelenting.

I attempt to keep my mouth closed, but the intensity of the spasm forces it open. I spray the stage with partially digested honey lemon water, and what appears to be last night’s shrimp tarts and mushroom canapé appetizer dinner in an Exorcist like dramatic flair.

And thus ends my audition. 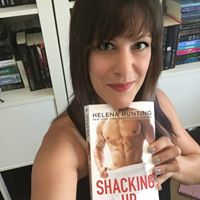 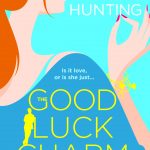 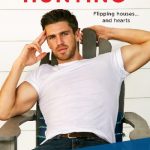 I Flipping Love You by Helena Hunting Blog Tour 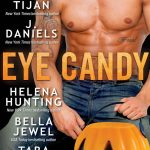