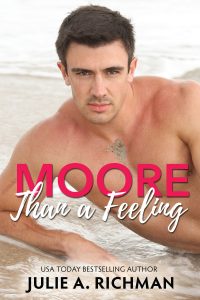 "Holly and Aiden broke up? Seriously? No way. Not those two."

Dumped.
No, not only dumped.
Blindsided and dumped.

I thought that Aiden McManus was my forever, my soulmate,
That was until he told me he was still in love with his ex.

I didn't want to believe him.
So, I convinced myself that our break-up was because of his upcoming deployment,
and not because he didn't love me.
Believing that, helped me get through those first months.

But after a while, I realized I just might be lying to myself.
And it was time to move on...

So, I moved on. Or tried to move on, anyway.
But that didn’t work out so well for me, either.
And it practically got me disowned from my family.

After that, I finally started to get my life back together,
I had everything back under control…
…Or so I thought.

Until I found out Aiden was back

And now he’s everywhere I turn,
Still pushing me away,
telling me he doesn’t want me.

But every time he calls me Angel or reaches out to touch my cheek,
I know what he's not admitting to himself –
He still loves me.

And I'm going to prove it to him.

I fell in love with the Moore Family back when Schooner and Mia came to be. I’ve read about Zac Moore and patiently waiting for Holly’s story.

Holly’s story is one of self discovery after the end of a relationship she thought was her forever. Aiden no longer feels like the man he once was and thinks that Holly deserves better. But are they really better apart or together?

Moore Than A Feeling is first and foremost, the story of family. A supportive, loving family will help heal anything. But this is also the story of finding the courage to tell your truths and the hopes for a second chance. This book was a raw and emotional look at dealing with difficult issues that need to be faced head on. I enjoyed every moment of it. What a journey that was MOORE than worth the wait!

Just when you thought there wasn’t any MOORE…

Order your copy of MOORE THAN A FEELING today! Add it to your Goodreads today!

“Did you hear back from Holly?”

Picking up his phone from the car’s center console and glancing at the screen, Schooner shook his head. He had left her a voice message and a text to let her know what was going on and that he and Mia were on their way back into the city and staying at the loft for the night.

“No. She must be out or have her phone turned off.  Maybe she’s at the movies with some friends,” he conjectured.

Heartbroken, Holly had decided not to spend the summer at the beach house on Fire Island with the family, knowing that seeing her ex-boyfriend, even for one more day, in the small, beach enclave where they lived and worked, would be far too painful. Instead, she moved back into the city, where she was very fortunate, that late in spring, to be able to pick up a summer gig at NYU, teaching two classes of English as a Second Language.

Aiden McManus, the charismatic and handsome manager of Maguire’s Restaurant on Fire Island had captured Holly’s heart, lock, stock and barrel, several summers before. A Long Island boy from a working-class family, Aiden helped pay for his community college education in Hotel and Hospitality Management through enlisting in the New York Army National Guard.

Holly’s previous love interests had all come from backgrounds similar to her own, well-educated at Ivy League schools with families of means. But Aiden was different, salt of the Earth and willing to get his hands dirty, Holly had never met anyone his age who was already a man. Aiden McManus definitely wasn’t a boy, and that was the sexiest thing Holly Moore had ever encountered.  There was no going back to boys after meeting Aiden McManus.

Prior to meeting, neither Aiden nor Holly would have ever seen themselves with the other, yet together they were a mutual adoration society. Holly enamored with this handsome, street-smart man’s man and Aiden overwhelmed that this beautiful and brilliant California golden girl would even give him a second glance, nonetheless fall in love with him. And when she fell in love with the dark-haired, dark hazel-eyed Irishman, Holly fell hard, with her entire heart, her feelings deeper and more complex than she’d ever known.

Their break-up blindsided and devastated her. Coming just a month before Aiden’s reserve deployment to Afghanistan, his harsh words tattered her heart, literally slamming her to her knees.

“Don’t bother waiting for me, Holly. This is the perfect natural-ending point for us. We’re just too different. So, please don’t kid yourself and wait.”

“You’re just saying this in case something happens. You’re trying to protect me, Aiden,” countered Holly.

Shaking his head, his eyes never leaving hers as he delivered the killing blow, “I’m sure that makes it easier for you to handle, but the truth of the matter is, I’ve been wanting to end things for a while. We’re really different. And I’m happier with a woman who’s more like me. I’ve been thinking a lot about my old girlfriend, Janine, and I’d like to see if we can work things out.”

Holly wasn’t the only one shocked by Aiden’s scathing declaration. Everyone who knew the couple couldn’t believe not only that they had broken up, but how and why or that Aiden would ever treat Holly with such cruelty.

“I don’t understand,” she cried to her father and stepmother. “How could I be so blind to miss the signs?” She glanced from Schooner to Mia, her tear-stained eyes positively devastated. But neither had an answer for her, because they were as shocked as she was at the sudden one-hundred-eighty-degree turn in Aiden’s feelings and intentions. It just didn’t add up. There had been no signs. About Julie A. Richman:

USA TODAY Bestselling author Julie A. Richman is a native New Yorker living deep in the heart of Texas, home to great music, BBQ, and awesome Tex-Mex. An award-winning nature photographer plagued with insatiable wanderlust, Julie spent many years scratching the travel itch while helping non-profit organizations and corporations with their marketing and advertising programs.

One response to “Moore Than A Feeling by Julie A. Richman Review & Excerpt Tour”