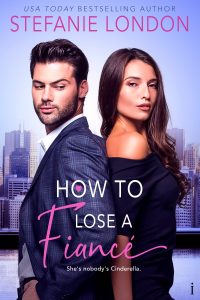 How to Lose a Fiance by Stefanie London
Published by Entangled: Indulgence on 06/17/19
Genres: Contemporary Romance
Buy on Amazon US | iBooks | Kobo | Nook
Goodreads

Sophia Andreou has always been the "good daughter" who tried to keep her domineering father happy. She followed the rules and did everything that was asked of her. But this time, her father is asking too much. The family company is crumbling, and her father has arranged a marriage to a Greek billionaire who can save their property business. What?! Umm no thank you. If Cinderella can dress up to win a prince, surely Sophia can do the opposite and ditch hers...

Dion Kourakis has come a long way from being an orphan with only a single friend to his name. Now he runs a billion-dollar investment company and has the respect of everyone in Europe. His charming personality covers a lot of emotional scars, including his desire to make his mentor proud. Dion doesn't exactly want a bride to go along with his next business deal, and he plans on letting the lass down gently when they meet...

Only, his future bride has turned out to be nothing like what he thought she'd be. She's quirky and has a habit of turning up to social events in strange outfits. It doesn't take a genius to figure out what she's up to, but the harder she tries to convince him she'd be an awful wife, the more he wants to convince her they'd be perfect together.

How to Lose a Fiancé by Stefanie London

How to Lose A Fiancé by Stefanie London was a fun and charming read. An arranged marriage nobody wants, that is until they meet, then all bets are off. Sophia has always done what was expected of her, the good daughter. But when her overbearing father demands she marry for convenience, she is done. She has a plan to ditch said fiancé. I loved when Sophia was just herself. She was quirky and fun.

Dion worked hard to be where he is today. He was driven and determined but could still be caring and kind. He saw right through Sophia’s plans and even though he was also against the marriage, once he meets her he is drawn to her. I loved their witty interactions. How to Lose a Fiancé by Stefanie London was fun and steamy read.

He expected some hesitation from her over the marriage thing. Hell, he’d hesitated himself. It had taken him a full two weeks to process her father’s offer—or rather, ultimatum—and come to grips with the idea of marrying a stranger. Seeing his mentor, Elias, hooked up to half a dozen different machines after having a fall in his home, with tubes coming out of every orifice, had finally pushed him over the edge.

Closure was now within Dion’s grasp, he could shut the final page of his father’s book. He wanted that feeling so bad he could taste it…so bad he would marry a stranger.

“We have plenty of time to get to know one another.” Dion motioned for her to follow him outside. “Your father told me that you’ve been working in the family business.”

“That’s right. I’ve been doing some general admin,” she replied. “And I have my own virtual assistant business, too.”

The sun had set some time ago, but the lights dotted around the garden brightened the front of the house. He unlocked the car and held the door for her.

“Ah, so you’re a businesswoman. I’m sure we’ll have a lot to talk about, then.”

“Sure, although it’s not real passion in life, to be honest.” She looked at him expectantly, as though wanting an invitation to elaborate.

“What would you rather be doing?” he asked.

The car’s engine rumbled as he pulled out of the circular path in front of the four-car garage. A warm breeze carried the salty tang of the ocean into the car.

“You know, I’m really passionate about taxidermy.” Sophia nodded as though this was the most normal thing to say. “There’s just something about animals that fascinates me.”

“Stuffing or mounting,” she said. “It includes both.”

Was she for real? Her expression didn’t reveal even a sliver of amusement.

“I see it as a way to prolong an animal’s life,” she explained. “I know it might seem a little strange, but trust me. When I bring my collection over, you’ll see how wonderful it is.”

He gulped. “Your collection?”

“Yes, I have a huge collection. Squirrels and racoons and a couple of cats that I found. Strays, you know. Lots of people think they have time for a pet and then they just dump them. I even have a fox. She’s a real beauty. I was thinking we could put her in the living room. Or maybe the foyer, so she can greet guests.” She clapped her hands together. “Baroness Sasha Foxington III would absolutely love that.”

Was he in a nightmare right now?

Her bestselling book, Pretend It’s Love, is a 2016 Romantic Book of the Year finalist with the Romance Writers of Australia.

Sign up for Stefanie’s newsletter and get a copy of A Kiss in Kite Harbour: http://stefanie-london.com/