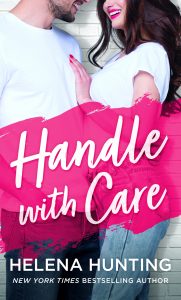 HE WANTS TO LOSE CONTROL.

Between his parents’ messed up marriage and his narcissistic younger brother, Lincoln Moorehead has spent the majority of his life avoiding his family. After the death of his father, Lincoln finds himself in the middle of the drama. To top it all off, he’s been named CEO of Moorehead Media, much to his brother’s chagrin. But Lincoln’s bad attitude softens when he meets the no-nonsense, gorgeous woman who has been given the task of transforming him from the gruff, wilderness guy to a suave businessman

SHE’S TRYING TO HOLD IT TOGETHER.

Wren Sterling has been working double time to keep the indiscretions at Moorehead Media at bay, so when she’s presented with a new contract, with new responsibilities and additional incentives, she agrees. Working with the reclusive oldest son of a ridiculously entitled family is worth the hassle if it means she’s that much closer to pursuing her own dreams. What Wren doesn’t expect is to find herself attracted to him, or for it to be mutual. And she certainly doesn’t expect to fall for Lincoln. But when a shocking new Moorehead scandal comes to light, she’s forced to choose between her own family and the broody, cynical CEO.

Handle With Care is a feel-good, sexy story of Lincoln and his “handler” Wren, that had me laughing out loud, wishing for the best and plotting on how Armstrong will finally get his!

The Shacking Up Series is quickly becoming my favorite of all Helena’s work. The banter and chemistry between Wren and Lincoln, the family dynamics, the slow burn and the crazy way in which this story goes down has this book as my favorite of the series. The twists and turns that I NEVER expected had me on the edge of my seat! I could not get enough of Lincoln and Wren!!

“Lincoln and Wren had me flipping through the pages frantically, begging for more. Their chemistry was explosive, their love story both hilarious and tender.”- L.J. Shen, USA Today bestselling author

“You have a suit fitting tomorrow morning.”

“Tomorrow morning? I have lots of suits; I’ll make one of those work.”

“Are they like the ones you wore to the funeral?” I ask.

“Well, they may have fit you five years ago, but they certainly don’t fit you now. I’ll text you the details and add them to your personal calendar.”

“You can’t do that without my cell number.” His smugness would be grating if I wasn’t two steps ahead of him.

I flash a fake smile. “I already have all of your personal details, Lincoln. Right down to your shoe size. And you can’t be late like you were this morning, so it might be a good idea to avoid the scotch tonight so you’re less bear and more human. You’ll need to use these things called manners. I can email you a refresher on what those are, should you need it.”

“Sarcasm is a weapon of the weak.”

My ears are on fire as he heads for the door. Jerk. I was being witty, not sarcastic. “Thanks so much for offering to help clean up the mess you made.” I turn to address the crinkled papers scattered on the floor.

It’s common courtesy to offer assistance if you’re the one who made the damn mess. Even Armstrong, who is the most epic of douches, has some manners. Usually he’ll try to look up a skirt or down a shirt while he’s being polite, but it’s better than this.

I turn to retrieve the papers when two things happen, a power surge ramps up the box fans—it happens at least twice a day, and at the same time Lincoln pulls the door open again. The simultaneous actions create a vortex of air inside my office, and my skirt flutters into the air. Like I’m Marilyn Monroe and I’ve stepped onto one of those subway grates. The fabric rises quickly, and a breeze hits me right between the legs, which is the exact moment I remember that I’m not wearing panties. Because they were covered in the coffee Armstrong spilled in my lap.

I drop the papers and battle the fabric back down. It’s fruitless, though, the wind tunnel whirls through the room like Dorothy’s freaking tornado, and the back of my dress goes up. I meet Lincoln’s gaze from across the small room. All it takes is a second of eye contact before those ridiculously blue eyes pull me in, and weird, inappropriate things start happening to my body. It’s irritating as hell. I don’t even like this guy, but my body seems as if it hasn’t gotten the same memo as the rest of me. Even more aggravating is the realization that based on his expression, he totally caught an eyeful of cooch.

Lincoln stands frozen at the door, eyes wide and fixed on my crotch, mouth hanging open.

“Close the damn door!” My voice is siren high. And loud.

“Right. Yes. I’m going. Now.” He steps out of my office, pulling the door closed behind him.

My dress settles around my knees. “Dammit.” I drop into my chair, which is probably what I should’ve done as soon as the wind tunnel started, but clearly I’d been too panicked to think straight.

On the upside, I went to see my waxer last week, so he’s seen my girl bits when they’re looking their finest.

On the downside, my project for the next six months has seen my naked girl bits.