Posted September 27, 2019 by sultrysirens in Reviews by Liz / 0 Comments 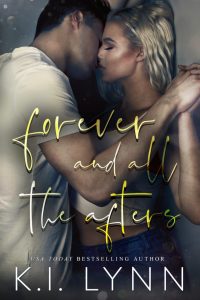 Forever and all the Afters by K.I. Lynn
Published by Self on 09/23/19
Genres: Contemporary Romance
Buy on Amazon US | iBooks | Kobo | B&N
Goodreads

He promised me forever.

Then he boarded a plane for a college a thousand miles away and never returned. A decade later there’s a ring on my finger with a new promise from a new love.

Just as my life falls into place, pretty as the pages of a magazine, my world is knocked over. The moment he touches me everything around me begins to crack, exposing all the lies I’ve told myself.

Every glance reminds me. Every touch ignites.

Things aren’t how they used to be.

Forever and all the Afters by K.I. Lynn is an emotional second chance story that will take you on a slow burning ride. Pike and Aubrey were high school sweethearts who wanted to share forever together. But then Pike left for college and never came back. Heartbroken, Aubrey tries to move on, but struggles, until she meets Caleb. Now she is getting ready to live her happily-ever-after with Caleb, but Pike is back.

Without any spoilers, Aubrey’s life is turnaround once Pike is back. What does he want and why is he back? He is back for her, but she is not the same woman she once was, but he knows he loves her. But Aubrey has moved on right? Caleb is the man she is engaged too and has been there for her. While Pike left and never looked back. Her choice is easy, right?

Forever and all the Afters by K.I. Lynn was full of angst. It made me want to scream and throw my eReader one moment and swoon the next.

K.I. Lynn is the USA Today Bestselling Author from The Bend Anthology and the Amazon Bestselling Series, Breach. She spent her life in the arts, everything from music to painting and ceramics, then to writing. Characters have always run around in her head, acting out their stories, but it wasn’t until later in life she would put them to pen. It would turn out to be the one thing she was really passionate about. Since she began posting stories online, she’s garnered acclaim for her diverse stories and hard hitting writing style. Two stories and characters are never the same, her brain moving through different ideas faster than she can write them down as it also plots its quest for world domination…or cheese. Whichever is easier to obtain… Usually it’s cheese.

Posted September 27, 2019 by sultrysirens in Reviews by Liz / 0 Comments