Posted May 8, 2020 by sultrysirens in Release Blitz, Reviews by Liz / 0 Comments 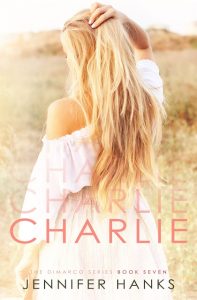 Charlie by Jennifer Hanks
Series: The Dimarco
Published by Self on 5/8/20
Genres: Contemporary Romance
Buy on Amazon US | Buy on Amazon UK
Goodreads

Charlie Donovan has loved one man in her life.

Spending years loving him from afar, she’s watched and waited for him to notice her as more than his sister’s best friend, but he never has. He’s made it clear that he would only ever consider her a little sister and friend. And after her parents’ disastrous marriage and divorce, she’s finally accepted that love is only for the lucky.

But luck has never been on her side.

Ben Dimarco hasn’t been living for a long time.

After a horrible end to a relationship he thought meant everything to him, he’s given up on the idea of love. Choosing to focus on his education and career, he only spends time with women who want something as shallow as he does and refuses to admit his feelings for a woman he shouldn’t desire.

Until she starts living life without him.

And he realizes love has been standing in front of him the whole time.

Just when he decides to go after everything he wants, jealousy rears its ugly head, and life as Ben knows it is torn apart. He’ll need the strength of his entire family to battle a past that should have been buried years ago so he can plan a future that includes the woman he’s always loved.

But can a fragile relationship survive the storm, or will the damage tear them apart?

Charlie by Jennifer Hanks is the seventh book in The Dimarco series, but the first I read. This can definitely be read as a standalone and enjoyed, I did, but I am excited to go back and read the story of the other family members as well. In Charlie, we meet Charlie and Ben. Charlie and Grace have been best friends for years and is a part of her family and Ben is one of Grace’s older brothers. Charlie knew Ben was the one for her from the first time she met him. But for Ben, she was like a sister, right?

But when it looks like she is finally moving on, Ben begins to realize Charlie was always more than he ever let himself realize. But is it too late? Charlie has never felt like she belonged anywhere. No one ever picked her. She was sweet and caring, but vulnerable and hurting. Ben was determined and strong, but a bit clueless. But once it mattered, truly mattered, he was all in. But can they truly have their happily ever after or was it too late from the start? Charlie by Jennifer Hanks was both a sweet romance and had a bit of intrigue and suspense.

The prequel novella, Kasey, is FREE!!
AMAZON US / UK / CA / AU
All free in Kindle Unlimited

Jennifer
Hanks
is the author
of The Dimarco Series as well as The Elite Securities Series. Her stories are
contemporary romance and romantic suspense, all with the underlying message of
the power and strength in love. She’s also a sucker for a Happily-Ever-After.
Her love of reading and books in general started at a very young age and has
steadily grown into a love of writing as well. She admits to being addicted to
all things romance and has no plans of quitting her habit. Jennifer lives in
Pennsylvania with her two children. When she’s not reading or writing, she can
be found with her kids at their various activities. Her house is frequently
filled with any combination of her children’s friends, nieces, nephews and a
variety of pets.

Posted May 8, 2020 by sultrysirens in Release Blitz, Reviews by Liz / 0 Comments