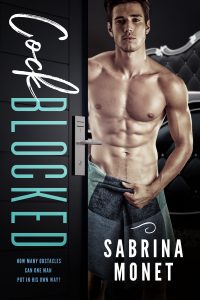 An uninvited ex-girlfriend; an overly flirtatious competitor; a completely untenable work situation…how many obstacles can one man put in his own way in the pursuit of the disinterested woman he can’t seem to get out of his head?

Camden Atwood is devastatingly gorgeous, cocky as sin and as Hollywood’s reigning “it” guy, not use to hearing the word “no” when he sets his sites on a woman. When Camden meets Kate Prescott, the ambitious, smart-mouthed new junior publicist assigned to handle him on an international press tour for his latest movie, he’s hooked from the minute his private jet is wheels up.

With a coveted promotion on the line, however, Kate has all the motivation in the world to steer clear of a romantic entanglement with her sheet-clenchingly hot new client. Camden is nothing if not always up for a challenge, especially when the game of cat and mouse is this sexy and this fun. The universe may have other plans however as it stacks the decks against this playboy in his pretty publicist pursuit.

Cock Blocked by Sabrina Monet is her first book in her Jetsetter series and give us a story about a top Hollywood actor used to getting his way and the woman that changes everything. It was a fun romantic comedy with all kinds of mishaps and laugh out loud moments.

Camden Atwood is one of Hollywood’s hottest actors. He is in high demand and has everything he could ever want. There is no end to the women willing to warm his bed.  But could he finally be ready for me? Camden was your typical actor, used to getting what he wants he was cocky and confident, but he was also just a man and was vulnerable.

Kate Prescott has worked very hard to be taken seriously as a publicist and now is her chance to prove she deserves the promotion she wants. But once Camden sets his sights on her, she knows she needs to keep him arm’s length. The last thing that would be smart for her career is falling for her client I loved Kate, she was strong, determined and very professional. But she cannot stop the attraction she feels for Camden.

Camden and Kate meet in the funniest of ways and seem to set each other off. But when she is assigned to be his publicist on his next press tour, he is determined win her over. But when his ex-girlfriend and a very friendly opponent are on the same touch, he has his work cut out for him. But with his past and her determination, can the find a way to be together?

Cock Blocked was a funny and sexy story about two people who have such a strong connection but find obstacles at every turn. Is it even worth pursuing? I loved Camden because he so determined, but we could also see his vulnerability. Kate is fighting hard for her future; can she take a risk for happiness with Camden when so much in on the line? I enjoyed reading this story and am looking for more on this series.

Sabrina Monet is a “forever fiance,” too busy writing HEA’s for her fictional characters, to get her own wedding planned! By day she is a publicist in the entertainment industry, who spends much of her day hatching marketing plans for monster and superhero movies. By night she likes to be reminded that she is a girly girl, who misses romantic comedy movies and loves dreaming up the next best thing to commit to paper in her contemporary romance novels. Her day job has allowed her to jet around the world, see celebrities behaving badly and on occasion sneak a taste of the good champagne, all of which makes great material for fun romantic adventures that she sincerely hopes her readers can fully immerse themselves in. Sabrina Monet lives in LA with her fiance and a fabulous timeshare dog named Piper.