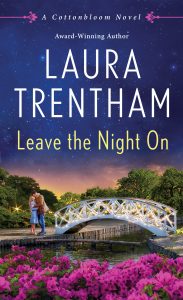 Leave the Night On by Laura Trentham
Series: Cottonbloom
Published by Self on 08/01/2017
Genres: Contemporary Romance
Buy on Amazon US | Google Play
Goodreads

Love, betrayal, and sweet revenge—life in Cottonbloom is about to get a whole lot hotter . . .

Sutton Mize is known for lavishing attention on the customers who flock to her boutique on the wealthy side of her Mississippi town. So when she finds a lace thong in her fiancé’s classic cherry-red Camaro, she knows just who she sold it to: her own best friend. In an instant, Sutton’s whole world goes up in flames. . .

Wyatt Abbott has harbored a crush on Sutton since he was a young kid from the other side of the tracks. He witnessed Sutton’s shocking discovery in the Camaro at his family-owned garage—and it made him angry. What kind of man could take lovely, gorgeous Sutton for granted? But then Sutton comes up with an idea: Why not give her betrothed a taste of his own medicine and pretend that she’s got a lover of her own? Wyatt is more than happy to play the hot-and-heavy boyfriend. But what begins as a fictional affair soon develops into something more real, and more passionate, than either Sutton or Wyatt could have imagined. Could it be that true love has been waiting under the hood all along?

Leave the Night On by Laura Trentham was my first read by this author and I really enjoyed it. A betrayal of the worst kind and a fake relationship that becomes so much more.

Sutton Mize finds out her fiancée betrayed her not only with someone else, but with her best friend. How does she know this? Because she knows exactly who she sold those panties too that she finds in his car! When she confronts him, she decides payback is in order and informs him she has been having her own affair with Wyatt.

As Sutton and Wyatt begin to spend time together they begin to see how real this can be for them. Even so, there was some drama around being from different sides of the tracks, or river, per se. But it was nice to see them build on what they had and not let others interfere. Though at times Sutton was a bit frustrating as well, with some of her comments or thoughts on Wyatt, but she quickly got passed that once she really saw him.

I do love small town romances and this one fit the bill nicely. This was a fun read. A fake relationship that suddenly becomes less fake with two people who are really nice, sweet and just good together. I enjoyed the story, the characters and am looking forward to reading more of this series. 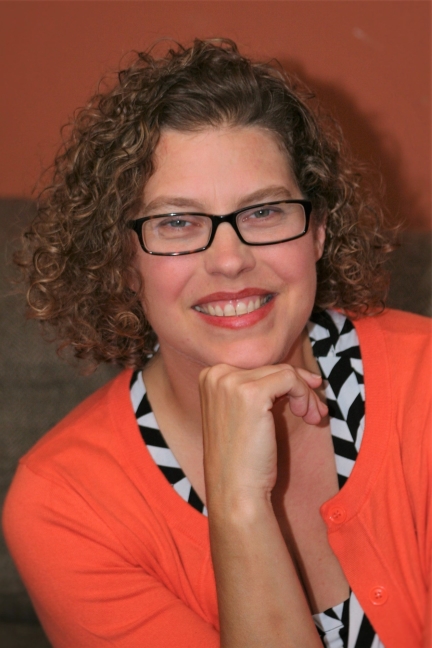 An award-winning author, Laura Trentham was born and raised in a small town in Tennessee. Although, she loved English and reading in high school, she was convinced an English degree equated to starvation. She chose the next most logical major—Chemical Engineering—and worked in a hard hat and steel toed boots for several years.

She writes sexy, small town contemporaries and smoking hot Regency historicals. The first two books of her Falcon Football series were named Top Picks by RT Book Reviews magazine. Then He Kissed Me, a Cottonbloom novel, was named as one of Amazon’s best romances of 2016. When not lost in a cozy Southern town or Regency England, she’s shuttling kids to soccer, helping with homework, and avoiding the Mt. Everest-sized pile of laundry that is almost as big as the to-be-read pile of books on her nightstand.