Posted May 14, 2019 by sultrysirens in Release Blitz, Reviews by Liz / 0 Comments 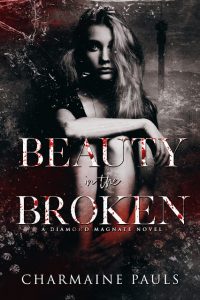 Beauty in the Broken by Charmaine Pauls
Published by Self on 05/14/15
Genres: Contemporary Romance
Buy on Amazon US | Buy on Amazon UK | iBooks | Kobo | B&N
Goodreads

Six years ago, Harold Dalton framed me for theft and sent me to jail to steal my diamond discovery. He gave his daughter to Jack Clarke in exchange for the excavation rights. Today, I’m free, and I’m coming for him with a vengeance. Six years of cruelty make beasts out of men. I’m going to take back what he stole from me, and more. I’m not interested in his properties or shares. I don’t want his small change. I want his biggest asset. Beautiful, mentally unstable, Angelina Dalton-Clarke.

Worth billions, she’s the wealthiest widow in the country, and also the craziest. Her self-harming tendencies had Jack declare her incompetent before he put a gun to his head and blew out his brains. Lina isn’t allowed to touch a cent of her riches. Her father manages her finances. He has all the signing power. As her husband, that chore will fall to me. But if she thinks I only want her for her money, she’s sadly mistaken.

Beauty in the Broken by Charmaine Pauls was a darker romance that was emotional and full of twists. Damian Hart served six years in jail after being framed for a crime he did not commit. Those six years allowed him to plan his revenge. He holds one man and his daughter responsible. They will pay. He was a strong and determined man with one mission driving his every action.

Angelina Dalton-Clarke broke my heart. She has suffered so much at the hands of others. Now she will suffer at Damien’s hand. Though at times she seemed a blt lost, she was also strong in her own way. But Damian also desired her. Wanted to own her in every way. Their chemistry was insane. Though he wanted to punish he took care of her as well. Their journey captivated me from the start. There was danger, lust and a whole lot of steaminess in this story!

ADD TO GOODREADS
READ CHAPTER ONE

Author Bio
Charmaine Pauls was born in Bloemfontein, South Africa. She obtained
a degree in Communication at the University of Potchestroom, and followed a
diverse career path in journalism, public relations, advertising,
communications, photography, graphic design, and brand marketing. Her writing
has always been an integral part of her professions.

After relocating to Chile with her French husband, she fulfilled her passion to
write creatively full-time. Charmaine has published nine novels since 2011, as
well as several short stories and articles. Two of her shorts have been
selected by the International Literary Society for an anthology from across the
African continent.When she is not writing, she likes to travel, read, and rescue cats. Charmaine
currently lives in France with her husband and children. Their household is a
linguistic mélange of Afrikaans, English, French and Spanish.
Author Links
WEBSITE
FACEBOOK
FACEBOOK GROUP
AMAZON
GOODREADS
TWITTER
BOOKBUB
INSTAGRAM

Posted May 14, 2019 by sultrysirens in Release Blitz, Reviews by Liz / 0 Comments