Posted October 13, 2020 by sultrysirens in Audiobook, Reviews by Liz / 0 Comments 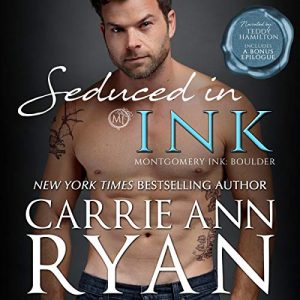 The Montgomery Ink: Boulder series concludes with a fake relationship where the heat and emotional connection are anything but false.

The moment Madison McClard’s parents tell her that her ex is getting married, there’s no getting out of their latest scheme. One moment she’s trying to get out of their clutches. The next, they’re telling her exactly who she’ll marry to save the family name. The one thing her parents don’t count on, however: Aaron Montgomery.

Aaron Montgomery didn’t mean to lie. Still, as soon as he overheard Madison’s dilemma, the words fell out of his mouth. Now, he’s fake engaged to a woman he barely knows, who also happens to be his new brother-in-law’s cousin.

As the deception mounts, so does the attraction. They told themselves it was only a ruse, but as feelings ramp and dangers surge, this Montgomery may have just met his match.

He simply has to fight to keep her.

I had the opportunity to listen to the audiobook of Seduced In Ink by Carrie Ann Ryan and I loved it. Narrated by Teddy Hamilton, I loved listening to Aaron and Madison’s story. A fake relationship romance that was emotional and touching. Madison’s ex is getting married and her parents have decide to set her future for her. What is a girl to do when Aaron decides to jump to her rescue and now they are fake engaged?

My heart broke for Madison, whose parents tended to walk all over, but I loved watching her grow during her journey. Aaron was caring and fun. They were friends and never expected the lines to blur, but now, can they see what is right in front of them? I loved their chemistry and watching them explore more in their relationship.

Posted October 13, 2020 by sultrysirens in Audiobook, Reviews by Liz / 0 Comments