Posted November 18, 2020 by sultrysirens in Audiobook, Reviews by Liz / 0 Comments 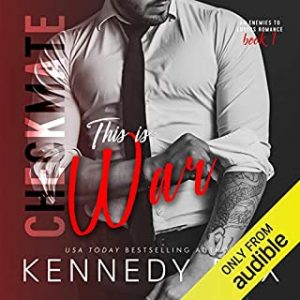 Audio: Checkmate: This is War by Kennedy Fox
Series: Checkmate
Published by Self on 12/23/16
Genres: Contemporary Romance
Buy on Amazon US | Audible
Goodreads

Travis King is the worst kind of a**hole.

He taunts me for being a good girl and mocks my high standards.

And I hate him.

It wouldn't matter so much if he were avoidable.

But considering he's my older brother's best friend and roommate, I see him more than I'd ever want to.

His sculpted abs and gorgeous eyes are wasted on such an arrogant man, which makes me hate him even more.

Even though I've had a crush on him since I was 10, the feelings weren't mutual and he's made that very clear.

He's always loved getting under my skin, and one night against my better judgment, I let him in my bed.

I've succumbed to his manw**re ways, but that doesn't change a thing.

Because the King is about to get played at his own game - and lose.

I originally read Checkmate: This is War when it was first published and I loved it. A Frenemies to lovers romance with love-hate sex? What is there not to love. So when I had the opportunity to listen to the audiobook, I jumped all over it. Narrated by Lia Langola, she truly did a great job brining Travis and Viola’s story to life for me.

Travis and Viola were great characters with amazing chemistry, even as they tore into each other. I loved seeing these two interact. With every quip back and forth these two get closer than they ever intended! While trying to stay away from each other, these two still find themselves drawn together.

I loved how feisty, strong and determined Viola was with her choices. Hurt by Travis in the past, she is determined to keep him at arm’s length. But as her older brother’s best friend and roommate, he is always around. Travis knows Viola is off limits. So her hatred for him usually just fueled him to act in the ways the drive her the crazy and push her away. Until one day, he truly sees her, and now he can’t stay away from her.

These two make quite the pair! Their antics had me laughing and truly enjoying listening to the audiobook. Then you get that ending! A definite must-read and/or listen!

Posted November 18, 2020 by sultrysirens in Audiobook, Reviews by Liz / 0 Comments