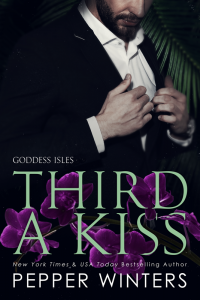 “There was hate once. Hate born from dangerous attraction and fate’s cruel design.
There was love once. Love destined to kill us if we didn’t surrender to our war.”

Eleanor Grace suffers an awful affliction. She’s falling for a man who doesn’t deserve her affection or her forgiveness. But there is no cure, so she does something reckless, stupid—she throws safety to the sea and leaps into danger.

Sully Sinclair suffers the same affliction. He’s falling for a goddess who will never earn his trust or his heart if he can help it. However, he wasn’t prepared for the lengths she’d go. How far she’d push to either stop such a bond or kill them both trying.

An elixir given to a monster.
A goddess running for her life.
An ending neither of them can survive.

THIS is why Pepper Winters is the Queen of dark romance. The beginning of this book will have you holding your breath, on the edge of your seat. You think you know what’s coming, but you have NO idea what’s really headed your way!

The twists and turns, the sexual chemistry, the relationship between Sully and Eleanor, the ENDING…absolutely stunning. Each book in this series has blown my mind and I cannot wait to see where book four takes us!

I was afraid of her in that moment.

Afraid of what she’d do to me.

Afraid of what she’d make me become.

Afraid that there was no turning back from this…regardless if I was ready or not.

Adrenaline rushed through my bloodstream as I locked my knees and closed my eyes.

I didn’t know why I was afraid. Why standing before Eleanor with my arm outstretched made me feel defenceless, exposed, and utterly at her mercy.

Seconds ticked past, making me bristle and my stupid heart double-beat.

I needed to see. To look at her. To know what the hell she was doing.

But the softest feather touched my hand, followed by another on my forearm.

Potent and powerful and perfect.