Behind his beautiful eyes
Lay a thousand secrets and lies.
But my own secrets are all laid bare
The twisted reality of a disgraceful affair.

I once deciphered the mysteries hidden in art
Then mistakes and desire tore me apart.

Now I’m shipwrecked at the end of the earth
Desperate again to prove my worth.

The lighthouse keeper is a stranger to me
Yet one night with him sets me free.

We find ourselves united by the stars above
Both of us needing the salvation of love.

Until our secrets and shame continue to build
And what was flourishing will soon be killed.

The minute Flynn opens the workroom door, my whole body zings with excitement and anticipation. Even with his dark frown, the remoteness surrounding him like an aura, the clipped tone of his voice, I react to him as if he were stroking my hair and whispering sweet nothings in my ear.

Jeremy hadn’t come close to eliciting anything even close to this…which is exactly the reason I’ll go out with him again, if he asks me. Jeremy is solid, grounded, honest. Everything about Flynn is a mystery and a fantasy. I’d gotten caught up in a fantasy with David—whose “mystery” had been a lie—and I’d paid the price.

“How was your weekend?” I set my satchel and lunch bag on the desk.

“Great.” I give him a once-over, looking for evidence of an encounter with a chick, but while he looks edible in his worn jeans and T-shirt, like a warm, rumpled bed I could nestle right into, his demeanor is as impassive as ever.

Does he ever smile? Every now and then I’ve caught a glimpse of amusement, a twitch of his mouth, but I’ve yet to see him fully smile.

“Any special instructions for today?” I turn on the laptop computer and open my notebook.

“Stay away from Jeremy King.”

Shock bolts down my spine. I jerk my head up to stare at him. He’s watching me with a narrowed gaze, his mouth set in a stern line.

“Um…what?” I can’t get another word out.

“Stay away from him,” Flynn repeats. “He’s not good for you.”

Irritation breaks past my shock. “How would you know who is or isn’t good for me? You’ve barely said twenty words to me the whole week I’ve been working here.”

“I don’t need to say anything to know the facts.” His tone hardens. “I don’t want you around him.”

“Well, you have no right to tell me that,” I retort. “How did you know I went on a date with him anyway?”

His jaw tightens. “You think people around here don’t take notice when their favorite son is out having dinner with the new girl in town?”

Christ. I experience a sudden longing for the cold anonymity of a big city.

“I know people are talking about me,” I snap. “But I refuse to let gossip dictate what I can and can’t do. And for your information, Jeremy knows about what happened to me, and it didn’t seem to bother him.”

“That’s not the point. You can’t work for me and see him.”

My shoulders tense. I focus on the computer, hitting the key to bring up the database software.

“My date with Jeremy has nothing to do with my work here,” I reply stiffly. “I didn’t, and won’t, tell him anything about the job or the fact that you’re my employer. You don’t need to worry about breach of contract.”

“This isn’t about the damned contract.” His voice is suddenly sharp.

He steps closer to me, his soapy, warm scent filling my nose. I hold my ground, not wanting him to see me weaken even though I’m melting inside at his nearness. Impassive though he is on the exterior, I can almost feel the energy coursing through him, his heavy strong heartbeat, the rush of his blood.

“I don’t want you around King,” he repeats.

“Does your animosity have something to do with him wanting to sell the lighthouse?”

“I’m not answering questions.” His gray eyes turn the color of metal. “I’m telling you to stay away from him.”

My pulse races. “You don’t have that right.”

“I’m your boss.”
“That doesn’t mean you can make that demand.” The words snap out of my mouth without thought. “And if you think you can threaten to fire me over this, then step back, mister, because I’ve been through the worst wrongful termination I can imagine. And even though my employer fucking won that battle, I still have plenty of fight left in me. I’ll put on my gloves and go another round with you, if I have to.”

I’m breathing fast, and my knees are quaking with sudden fear that he’ll make me prove my bold statement. I dig my fingernails into my palms. The air between us sparks with electricity. I force myself to hold my ground, to look directly at him and—

Admiration flashes in his eyes, like a silver comet streaking across the sky. His stern expression doesn’t change, but that brief glimpse of warmth eases the tension knotting my shoulders.

“I’m not going to fire you.” His voice is measured and controlled. “But I will not have you seeing King.”

“You don’t like him, so that means I have to stay away from him?” I ask. “Sorry, no. He’s one of the few people in this town who has been nice to me, and I enjoyed our date. I refuse to discount the possibility of Jeremy being my first real friend here.”
Flynn’s jaw clenches. “He wants to be more than your friend.”

Anger crashes over his features, and a vein throbs in his forehead. If I didn’t know better, I’d think he was jealous.

But I do know better. He’s mad because I’m refusing to do something he wants me to do. Despite, or maybe because of, his isolated lifestyle, Flynn is clearly a man accustomed to getting what he wants.

“He kissed you.” The word grind out of his mouth like broken glass.

“Oh yeah?” My heart kicks into gear, blood rushing through my veins. “What would it be, then?”

He pulls in a breath, his gaze settling on my mouth. “Hot.”

“Prove it.” Borne of my endless nighttime fantasies, the dare flies out of me without thought of the potential repercussions.

Before I can take another breath, he grabs my shoulders and pulls me against him. I freeze, stunned by the reality of a moment I’d imagined more times than I can count—the sensation of his body against mine. And God, he feels exactly the way I’d imagined, a solid wall of heat and muscle pulsing with life. Rock-hard arms that could wrap around me so tightly nothing would get past them.

He stares down at me, his steel-like gaze sparking with intent like iron striking stone. I can’t move, can’t breathe, can’t think.

Then his mouth crashes down on mine, an onslaught, a possession, a claiming. Hunger bursts through me, a desire so sharp and intense it destroys all my defenses in one fell swoop. I moan, everything inside me weakening and aching for more. He slides a hand to my lower back, fitting our bodies together. I yield everywhere, my curves softening against him, any thought of resistance dissolving in a haze of disbelief and craving.

I part my lips tentatively, let him inside. My head spins with the taste of him—something decadent and forbidden. Our tongues touch, breath mingling. Arousal floods me, swift and hard, as if all the fantasies in which I’ve indulged have primed me for this moment. I bring my hands up to his face, his stubble coarse against my palms, slide them down to the sides of his neck where his pulse throbs heavily. He’s like the sea—mysterious, unpredictable, powerful. I could get lost in him, drown, let him sweep me away to a distant land where no one knows who I am and what I’ve done.

He lifts his head, breaking our kiss and stepping away from me at the same time. Heavy breaths saw from his chest, and his eyes are darkened to black. I bring a shaking hand to my mouth, suddenly unsure if the kiss just happened or if I’m like Alice in Wonderland, spinning downward, lost in my intricate imagination. 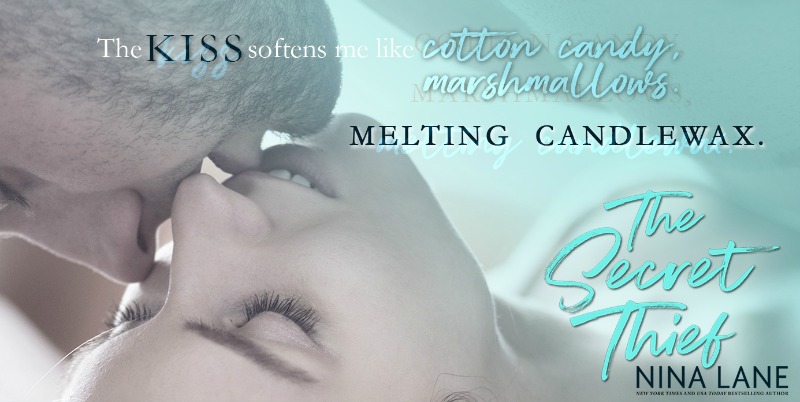 New York Times & USA Today bestselling author Nina Lane writes hot, sexy romances about professors, bad boys, candy makers, and protective alpha males who find themselves consumed with love for one woman alone. Originally from California, Nina holds a PhD in Art History and an MA in Library and Information Studies, which means she loves both research and organization. She also enjoys traveling and thinks St. Petersburg, Russia is a city everyone should visit at least once. Although Nina would go back to college for another degree because she’s that much of a bookworm and a perpetual student, she now lives the happy life of a full-time writer.