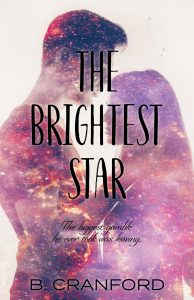 The Brightest Star by B. Cranford
Published by Self on July 13, 2017
Genres: Contemporary Romance
Buy on Amazon US | Kobo
Goodreads

Naturally, she did. And two years after he walked away, leaving her hurt and broke, he somehow managed to look better than ever. Of course.

She didn’t want to see him, let alone speak to him, but apparently, he wasn’t going to give her a choice.

No, scratch that. The one he drove away with poor decisions and lies, big and small.

She might have been having a bad day, but she was still the bright, beautiful girl he’d been missing for far too long. His brightest star. Still the only girl he’d ever want. If only he could convince her of that.

Is it too late to say sorry?

Sebastian wants a chance to win back Brighton’s trust—and her future.
Brighton wants to be able to move on from the past, once and for all.

But neither of them want to say one final goodbye…

The Brightest Star is a beautiful love story about forgiveness and letting go of the past.

I truly enjoyed Bright and Sebastian. A true love story broken by Sebastian and his addiction to gambling. When he left Bright years ago after he failed her, Sebastian built his rehabilitation around making things right with her again. However, Bright is not in a place to trust Sebastian and doesn’t know if she can ever get back to that place.

The Brightest Star is a delicate story, told in flashbacks of simpler times and present day reminders of what used to be with a dash of humor thrown in. This book made me smile, cry and laugh along the way. It also made me realize sometimes, forgiveness and letting go of the past is the best way to move forward.

This debut novel by B. Cranford was so unexpected but it was truly everything I needed. I loved this book and hope for a story about Jade and Declan

B. Cranford is a proud Australian living in the USA, a lover of books, breadsticks and bed, and the mother of two children who are far too similar to their father for her liking. A lifelong reader, she dove into the romance genre on the recommendation of her best friend and hasn’t looked back since. Her debut novel, The Brightest Star, a second chance romance with (she hopes) heart and humor will be releasing on July 13, 2017, which just so happens to be her birthday. Because if you release a book on your birthday, you get twice as much cake, and that can only be a good thing.