Posted July 6, 2017 by sultrysirens in Reviews by Kim, Uncategorized / 0 Comments 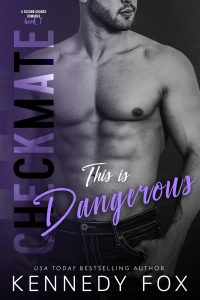 Logan Knight is a real life knight in shining armor.
A detective godsend in a sleek black suit has me thinking less than secretive thoughts. Brooding and mysterious, he’s the kind of guy every girl instantly notices. Between his seductive smirk and charming good looks, it’s no wonder I can’t help the way he makes me feel whenever I’m near him.
Too bad he’s unavailable—or so he says.

He thinks I’m a do-gooder who shouldn’t get involved with a guy like him. His past is messy and relationships just add to that. He insists the timing is all wrong and he’s devoted to his career, but I don’t buy that excuse for a second. I see the way his body tenses and his jaw ticks every time another guy is around me. He just won’t admit it, but I’m more determined than ever to show him what he’s missing.

I’m a devoted animal rescuer and I’ll risk everything to save them, but when a dramatic turn of events puts both our lives at risk, I’m positive Logan will write me off for good. But when he asks for my help with a personal crisis, I know it’s my last chance to finally show him I can handle anything he throws my way—messy past and all.

He might think he has me all figured out, but I’ll prove him wrong no matter what he thinks. This game of push and pull has me running in circles. One wrong move and we could both lose.

Kennedy Fox has done it once again. This is Dangerous will leave you on the edge of your seat!! This is a friends to lovers story that will having you swooning up until the last page!

Logan is one hell of sexy, charming detective who is always rushing in to be the “Knight” in shining armor. With his past full of secrets, Logan tries to keep Kayla as far away as possible. He says he can’t do a relationship but everything about Kayla has Logan second guessing himself.

Kayla is a beautiful woman, inside and out. She is hardworking, a great friend, a lover of all things donuts and compassionate towards her rescue animals. Kayla has no family and was tossed around in the foster system which leaves her longing for love. She is instantly drawn to Logan but he keeps going hot and cold with her, leaving Kayla always guessing where she stands.

When Kayla finally realizes it is time to take a chance on someone else, Logan just cannot let her go. The chemistry between the Logan and Kayla is amazing as always but their sexual tension is OFF THE CHARTS HOT! When they finally give in, I can’t say anything more than WOW! Sexy, hot and just down right dirty! (I will never look at donuts the same!)

I love how we see what kind of a person Kayla truly is. Volunteering, animal shelters, saving animals, she is just truly an all around good person. I enjoyed finally learning Logan’s backstory and what led him to where he is today. However, there are so many secrets that Logan and Kayla are keeping from each other and some start to come to light in This is Dangerous. Will Kayla share what she is hiding? Can Logan come clean about everything in his past?

And just when I thought I had it all figured out, Kennedy Fox threw me for a loop. What in the hell just happened?!?!? I never in a million years saw that ending coming!! It left me on the edge of my seat and I truly cannot wait for This is Beautiful, book #2 in the series!!

Posted July 6, 2017 by sultrysirens in Reviews by Kim, Uncategorized / 0 Comments