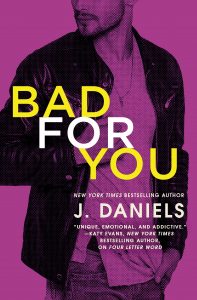 He didn't want to be bad. He just didn't have a choice...
Shayla Perkins isn't the kind of girl who makes the same mistake twice, especially when it comes to Sean "Stitch" Molina. So when he gives her the world's biggest rejection, that's it--she's done. Until the sexy, silent, unavailable Sean makes Shay a very personal offer. Of course, it still doesn't mean he's interested in her. Or does it?

Sean has done things in life. Bad things. And he's paid the price. All he wants now is to make up for his past by doing good in the present. And no one deserves more good than Shay. Beautiful on the inside and out, Shay is the kind of woman who should be cared for and protected--especially from a man like Sean. He's tried to keep his feelings for her in check, but a single, reckless impulse pulls them closer than ever before.

Soon the two are sharing their biggest dreams and satisfying their deepest desires. But what will happen if the only way to truly give each other what they want most...is to let each other go?

Bad for You is the third book in the Dirty Deeds series by J. Daniels and in my opinion, the best book she has ever written!  We’ve all been patiently waiting for this book and boy, does it deliver!

Sean (Stitch as he’s referred to) is a motorcycle riding, ex-convict who covered in tattoos, and has made plenty of wrong choices in his life.  He has been the cook at Whitecaps for over a year trying to make something of his life.  Stitch has always been a taken with Shayla, who is a waitress at the restaurant.  However, he knows that once she gets to know the “real” him, she will walk away.

Shayla is a waitress and is also trying to get her hairstyling business of the ground.  She is a hard working woman who loves her family and her friends and will do whatever necessary to make her dreams a reality.  Shayla is interested in the quiet cook who has shown interest in her in the past, but has now gone radio silent.  Struggling to deal with her younger brothers while her parents are away, Shayla is in desperate need of help and Stitch decides against his better judgement to jump in to help.

What happens during the course of this story is pure magic. The co-workers have an interesting dynamic. Shayla tells Stitch every single thing that’s going on while Stitch says nothing…he just soaks it all in.  Their relationship was a slow build, from co-workers to friends to even more and the journey that these two characters take is unforgettable. There is no one more deserving of a HEA than Stitch and Shayla.

Bad for You will put you through the wringer.  I laughed, I sobbed, I got so angry that I had to stop and collect myself.  Stitch and Shayla’s story was absolutely flawless.  I always try to savor any book that J. Daniels writes, but I end up finishing them in one sitting because I am just completely enthralled in the story.  Bad for You is no different.

I will also tell you this, Bad for You resonated with me like no other.  It tells the story of how words can hurt and how words can heal.  I know someone just like Stitch and I have tried to give him all my words, to heal him.  This book gives me hope that eventually, he will hear what I’m really saying.

“If you’re a fan of Kristen Ashley, then you will love this book.” -Aestas Book Blog on Four Letter Word

J.Daniels is the New York Times and USA Today bestselling author of the Sweet Addiction series, the Alabama Summer series, and the Dirty Deeds series.
She would rather bake than cook, she listens to music entirely too loud, and loves writing stories her children will never read. Her husband and children are her greatest loves, with cupcakes coming in at a close second.
J grew up in Baltimore and resides in Maryland with her family.
Sign up to receive her newsletter and get special offers and exclusive release info: http://authorjdaniels.com/newsletter/
Twitter | Instagram | Website | Facebook | Amazon Author Page |Goodreads | Reader’s Group