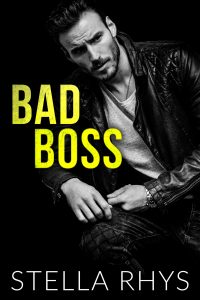 Bad Boss by Stella Rhys
Published by Self on July 13, 2017
Genres: Contemporary Romance
Buy on Amazon US | Kobo
Goodreads

I had always been the good girl – the workaholic with every second of her life mapped out to a tee.
Then I got trapped in an elevator with Julian Hoult.
He was… irresistible. Sophisticated sex in a crisp white shirt. His voice alone dropped me straight to my knees. What was I supposed to do?
Well….
I can tell you what I was definitely not supposed to do.
I was not supposed to run into him ever again. I was not supposed to be desperately unemployed, and I was definitely not supposed to accept his dirty little job offer.
But I couldn’t resist.
As CEO of the Hoult Media empire, Julian will stop at nothing to get what he wants. So for his next venture with Manhattan’s most lecherous billionaires, he’s hired me to play the role of bait. And while my official title is that of Executive Assistant, my actual job requires low tops, tight skirts and flaunting everything I’ve got till his clients are easy to bend – till they can barely think for themselves anymore.
It’s sleazy and wrong. Against everything I’ve worked for. But with Julian as my audience, I can’t help but enjoy every second. Thanks to him, I’m embracing the bad, and I swear…

I’ve never in my life felt this damned good.

Sara quits the “dream job” she has had for years after learning she will never get to move up the corporate ladder and is not given credit for her work. Sara is on the phone with her BFF talking about how she needs hot, steamy, no strings attached sex when she runs into Julian in the elevator.

Julian is all business, all the time. Issues in his past have made him the work driven, intense man he is. He’s rich, handsome, and is a workaholic who owns his own baseball team.

When Julian and Sara meet, the sexual chemistry and banter between the two is unbelievably hot! Unfortunately, their fun is cut short until they meet again a few weeks later when Julian makes Sara an offer she can’t refuse. Julian is now on his way to win the biggest deal of his life, thanks to Sara.

I adore Sara. She knew exactly what she wanted and had no fear, she just went for it. I enjoyed seeing Julian be so intense yet soft with Sara. As the story progressed, Julian and Sara both share their pasts and how it made them the way they are. You can feel the moment they both truly fall in love and it is spectacular!!

Stella Rhys is an author of contemporary romance and can’t help but write it hot, steamy and borderline filthy (just kidding — it’s flat-out filthy). Writing aside, she lives for coffee, the Yankees and cooking recipes way out of her league. She was born and raised in New York and now lives there with her husband and charmingly entitled fur baby.