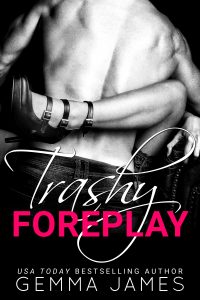 Never flirt with temptation.
Never lust after what I can’t have.
And never, under any circumstances, screw a married man again.

By the time this story is told, I’ll have failed at all three…

With my heart and reputation in ruins, I can’t afford to make another mistake. Boarding a flight to Seattle is supposed to give me a clean slate, but from the moment Cash Montgomery slides into the seat next to mine, I’m captivated by his steel eyes that see too much. I ache for this stranger in a way I’ve never ached for anyone.

But I didn’t know he was married, and I sure as hell didn’t see the curveball fate had in store. My clean slate in Seattle isn’t so clean after all because my new boss is the man forbidden to me.

And the only man I want.

The only man I’ll do anything for, even if it means breaking the promise I made to myself when I fled my old life in shame.

I wasn’t supposed to fall for a married man, but I did.

NOTE FROM THE AUTHOR: Though the subject matter deals with cheating, there are no innocent parties here. Book 1 in the Trashy Affair series.

I devoured this book. Devoured every page. I know Trashy Foreplay by Gemma James will not be for everyone, but the story itself was so captivating. A slow burning forbidden story where sparks and angst fly off the pages.

When Jules runs from her mistakes, she is determined to follow a certain path. She will start fresh and make the right choices. She has three rules. And then he sat next to her on the flight to her new beginning. Their chemistry was powerful from the start.

I loved Cash Montgomery. He was a good guy in a very bad situation. He wants to be happy and have love in his life, but instead he is in a loveless marriage. But at the end of the day, he is still nonetheless married.

Jules and Cash broke my heart and frustrated me at the same time. Jules is fully aware of her previous mistakes. While Cash learns some truths about his wife. What follows is their story, because as fate would have it, Jules ends up working at Cash’s company.

This is a story of the forbidden. It’s in the blurb and the author gives a warning as well, but the story, the story itself will draw you in. It’s the story of two people who meet by chance and feel a strong, slow burning connection, but one of them belongs to another. Jules has been down this path once, she is determined to not go there again, but sometimes life throws you a curveball you cannot throw back.

The tension and chemistry in this book is off the charts. I cannot wait for the next book in this series. This is a series, so take that as you will, but reading this book is so worth it. And yes, there is cheating, but remember, there are three sides to this party. Does it make it right, no, not at all, but in this book, it is one wild and crazy ride.

I go perfectly still as his arm snakes around me from behind. A warm palm flattens against my stomach, and the tips of his fingers inch beneath the waistband of my jeans. Everything south of that tempting hand flares to life, setting off a deep ache I know only he can fix.

Pulling me against his body, he leans down and whispers into my ear. “Watching him touch you is killing me.”

“Knowing you’re married is killing me.”

He curses under his breath. A hint of his woodsy cologne, along with the sweet aroma of bourbon fills my nostrils.

“Have you been drinking?”

“Maybe a little.” He whirls me around until we’re face-to-face, and my heart flutters in my throat as he tightens his arms around me. “Come upstairs with me.”

His proximity riots through me, the heat of his body sizzling all the way to my fucking toes. We fall into a lazy sway, dancing but not quite, and for a crazy second, I consider following him to the VIP area in the loft. As far as I can tell it’s empty unless a stray couple is hiding in the shadows in the very back. I doubt it though. The club is vibrating with restless energy as everyone crowds the first floor in anticipation of the concert.

His words jolt me to awareness, and I realize I’m staring at his chest. I curl my hands into fists at my sides, too tempted to run my palms down that broad expanse hiding underneath cotton. I bet it’s the softest material on the planet, but I won’t find out because I’m not going there.

Because I have zero control right now, and we’re standing in the middle of a busy club with God-knows-who watching. And if I do touch him…I might not stop.

“Jules,” he murmurs. “Bring those gorgeous eyes up here.”

I lift my chin and dive headfirst into the fire of his gaze. His eyes are a smoldering, liquid steel. “Cash…please…”

“Don’t make me want to give in. You’re married.” My voice cracks on that ugly word.

“My marriage is a sham.”

“Your marriage is your business.” I grip his arms, intending to push him away. But somewhere along the way, my brain gets its wires crossed, and I end up curling my fingers around his biceps. God, he’s built—solid man through and through.

“I disagree,” he says, dipping his head until our mouths linger a hairsbreadth from each other. “Everything about me is very much your business.”

“Because I can’t feel this way about you without it being your business.”

Gemma James is a USA Today and Amazon bestselling author of a blend of genres, from new adult suspense to dark erotic romance. She loves to explore the darker side of human nature in her fiction, and she’s morbidly curious about anything dark and edgy, from deviant sex to serial killers. Readers have described her stories as being “not for the faint of heart.”
She warns you to heed their words! Her playground isn’t full of rainbows and kittens, though she likes both. She lives in Oregon with her husband and their four children–three rambunctious UFC/wrestling-loving boys and one girl who steals everyone’s attention.