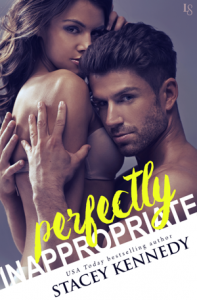 Olivia Watts knows that her problems are painfully average. She got engaged, and her fiancé cheated. She gave up on her dream job—street photographer—and settled on a more practical one: graphic designer. She scrimped and saved to buy a home, only to realize how empty it was. So when Olivia hears about an exclusive dating app that matches subs with highly trained doms, she does something she never thought she’d do in a million years: She signs up. The last thing she expects to find is a man whose sizzling touch reawakens the woman she used to be . . .

Noah Grant has no time for relationships. His sole purpose is to win reelection. That’s why he pays a premium to the discreet app that satisfies all his dark desires. But after sweet, innocent Olivia is vetted and arrives for their week together in his penthouse, it’s blatantly clear that she’s running from her demons. Noah’s more than willing to be her escape—until their emotions get tangled up in their games. Now, to become worthy of Olivia’s heart, Noah will have to prove that he’s more than a fantasy.

“Is this some kind of joke?” Noah asked, lifting his gaze to her face.

“Is what a joke?” She blinked.

He held up the piece of paper. “No one, Olivia, and I mean, no one that I have met before has ever agreed to everything on this list. Explain to me why you, this timid person I see now, has no reservations about some of these items on the list?”

Her cheeks blushed a deep crimson and she quickly averted her gaze. “Well . . .” She drew in a long deep breath. “Well, I decided to go for it all because I want to experience all of this without holding back. And that means I need to do things I would never do before.”

Noah stepped forward, caught her chin, demanding her full attention. The eyes were his way into a soul. “You clearly have not thought this through,” he stated firmly. “If we were together, I guarantee you that you would lose sense of yourself at some point doing our scene. How could you voice what you hate if you’re not fully coherent?”

“That’s true,” she said softly, embarrassment shining in her eyes. “I suppose I hadn’t considered that might happen.”

And he supposed that was because she hadn’t done anything like this before. “We’ll need to address your limits later.” He scrunched the paper in his hands and shoved it into his pocket. Because right now he didn’t trust this woman.

Everyone had rules. Why didn’t she?

Intent to discover that answer, Noah moved into his living room and took a seat on his dark gray leather armchair set next to the white leather couch. Rolling up the sleeves of his white dress shirt, he said, “Undress to your lingerie.”

Olivia paused, her cheeks and chest flushing a deep red.

From his seat, he arched an eyebrow and waited.

A long, weighted minute passed before she inhaled a huge deep breath and blew it out slowly. She reached back and unzipped her dress, letting the fabric flutter to the ground. Noah’s mouth went dry, his cock swelled painfully in his pants. She looked even better out of the dress than she did in it.

There was not a second that he wasted. He enjoyed every one of them as he gazed over her black lacy lingerie and garter belts attached to black stockings with lace. She’d taken the time to look good for him, and he appreciated the view probably more than she knew. When he lifted his eyes to hers again, he noted the arousal there, and the darkness in her enlarged pupils. “Come to me,” he ordered.

She approached slowly then stopped. Her feet rested in between his legs, her fingers twined in front of her. He noted the slight wobble on her heels. Now he’d have his deeper look into this woman. Call it being intuitive, or simply good at reading people, but Noah trusted his instincts. And they had yet to fail him. “Before anything goes any further, you need to be honest with me.”

She swallowed deeply. “Honest about what, sir?”

He gave her a penetrating look, and she reacted, shifting from foot to foot. “What exactly are you looking to get out of this experience?”

He frowned and shook his head. “Be real with me.” This was her test. Her answer would gauge if Jared’s warning held merit. If her answer seemed staged, they were done. “Why are you here?”

Her gaze fell to the floor and her deep inhale and exhale raised and lowered her shoulders before she looked at him again. “I’m here because I want to remember what it feels like to be wanted. I want to remember how life felt when I could trust the people around me.” Her breath hitched, emotion filling her eyes, her chin quivering. “I want to feel beautiful again. I want to feel happy.”

At that, Noah cocked his head. “Now why would you need to remind yourself of all those things?”

“My fiancé cheated on me and I broke off our engagement,” she said quickly.

He caught her long exhale right after. That told him this had likely been the first time she admitted that aloud. “I’m sorry,” he told her gently. “That must have been extremely painful. When did your engagement end?”

“A month ago, and yes, it was incredibly painful.” She took in another deep breath then lifted her chin. “I want you to understand that I’m not doing this to spite my ex. I’m doing this for me. To rediscover myself.”

“And you think being here with me will help with this?”

She nodded. “I have no doubt that it will. This is my chance to take my life back. I’m here because I want to fulfill a fantasy. For me, not for anyone else.” She stepped closer to the chair. “Am I nervous? You bet I am. You make me incredibly nervous. You’re gorgeous for one, and your confidence is also very intimidating.”

With every word she said, the world faded away. For a second in time, it was just them that remained in a space where all he saw was her strength hidden behind a wall of pain. That woman, the one she fought to find again, was the only woman he saw now. 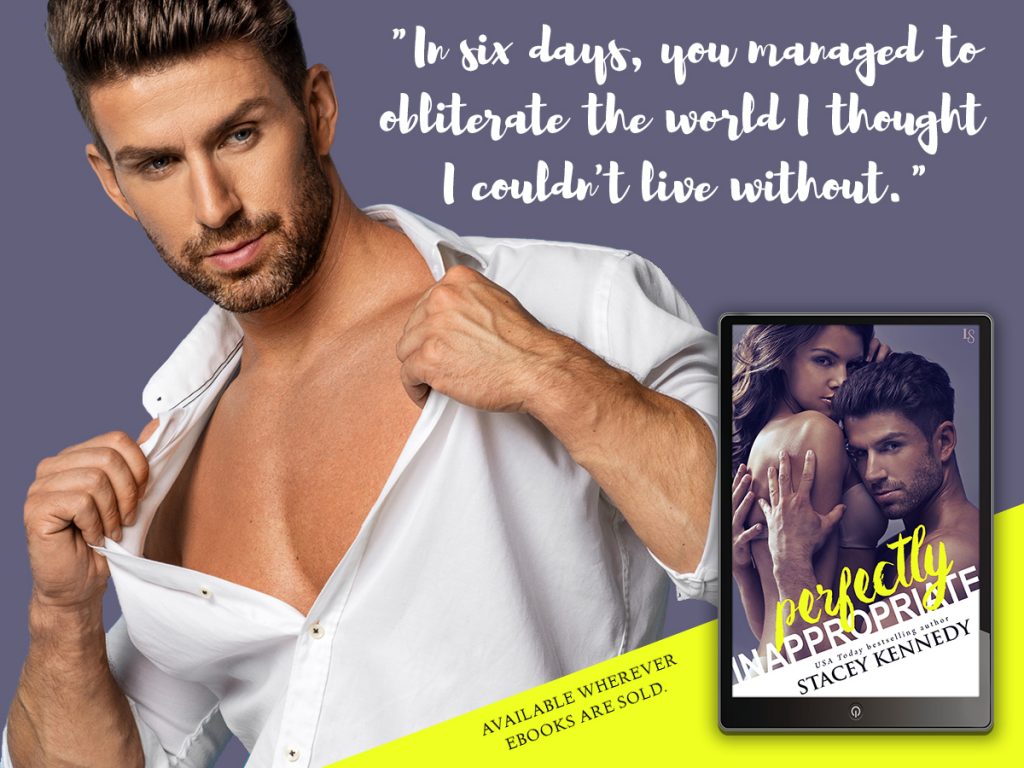 Stacey Kennedy is an outdoorsy, wine-drinking, nap-loving, animal-cuddling, USA Today bestselling romance author with a chocolate problem. She writes sexy contemporary romance with a dash of suspense and a sprinkle of heart and humor, including titles in her wildly hot Kinky Spurs, Club Sin, and Dirty Little Secrets series. She lives in southwestern Ontario with her family and does most of her writing surrounded by lazy dogs.