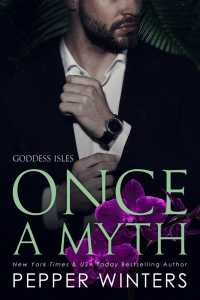 “There was a boy once. A boy who wasn’t strong enough to save me when I was taken.”

“There was a girl once. A girl called Tess Snow who sat with me in the dark waiting to be sold.”

“There was an owner once. An owner who bought me, entrapped me, and made me his unwilling goddess.”

Eleanor Grace is a naïve dreamer. Trusting and young, she believes her book-loving boyfriend can save her when her freedom is snatched and sold. Squirreled away to an island at midnight, delivered to a man even darkness won’t touch, she’s bound by a contract.

Five pieces of her soul.

Sullivan Sinclair is the giver of fantasies. Any wish, any desire—he is the master at quenching even the filthiest appetites. His private paradise and perfectly trained goddesses are there for one purpose: to ensure every guest is extremely well satisfied.

She belongs to him.

Once A Myth is what dark romance lover dreams are made of!

Pepper has a gift for creating worlds that you just cannot help yourself from getting lost in. Chapter by chapter you become emersed in it, begin a love/ hate relationship with the characters and overall fall in love with a story that will have you in a constant state of awe with the turn of each page. The angst level and slow burn in this book are AMAZING!

As a dark romance lover, I will say that Pepper has gone above and beyond with Once a Myth. The two main characters are both strong, powerful and I am in love with them! There are also secondary characters that I think will bring an entirely new level to this story as it progresses. The descriptiveness of this story makes you feel as though you yourself are living it and I have to say, I am fascinated with One A Myth and can not wait to see what transpires in the next book.

“I’m saying I’ll cause you untold problems if you keep me here.” I narrowed my eyes. “I’m not afraid of you.”

He stepped toward me quickly, crowding me, bringing naked, masculine flesh and scorching body heat.

I backpedalled, losing ground, hating myself the second I tripped.

He laughed coldly. “Not afraid? I think you’re fucking petrified.”

Digging my toes into the sand, I cocked my chin. “I meant what I said, Sully Sinclair. Keep me trapped against my consent and I will make you pay. I’ll find some way to curse—”

“Curse me?” His arm shot up, his hand sinking into my hair. In a single heartbeat, we went from apart to linked. His fingers curled tight around the strands, tugging my scalp, sending more chills scattering. “You’ve already cursed me. You cursed me the second you arrived.”

I tried to pull away, but his hold turned aggressive.

His eyes flashed navy in the darkness as his tongue ran over his bottom lip. “Let you go? I should, shouldn’t I?” His stare landed on my mouth, and lust became a sapphire fire in his gaze. “Too bad I’m not going to.”