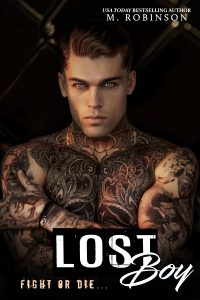 Lost Boy by M. Robinson
Published by Self on 08/21/2018
Genres: Contemporary Romance
Buy on Amazon US | iBooks | Kobo | B&N
Goodreads

In a world where I had no say, violence became my refuge, and nothing else mattered.
Not even my own life.
Until her.
Skyler Bell.
It all started the first time I heard that voice. Giving me hope for tomorrow. My first love was everything all at once.
Consuming.
Maddening.
Forever.
Mine.

I finally found the price of love and it cost me...

Without giving any spoilers, I was never a big fan of Noah since we first met him, so I was not sure how I would feel when we go his story. I am not sure why I was worried. This is M. Robinson after all and I loved Lost Boy from start to end. This was an angst-filled, heartbreaking and so damn emotional. M. Robinson always seems to put me through the wringer!

Skyler had one purpose in life. She dreamed of performing and was determined to make it big. She spent time with the rich and famous. Noah on the other hand had always known where his life was headed. Being born to a President of an MC club, there was no other place for him. He lived in the dark, she lived in the lights. It seemed like everything was against them.

But nothing is ever as it seems, especially in the worlds M. Robinson creates for her readers. Skyler has her own demons that weigh her down and Noah had a journey he had to follow. It seems Skyler and Noah have known each other for a long time, but go long period of times without the other, yet somehow, they are always drawn back to each other. But with so many obstacles, will they ever truly have a chance for more?

Lost Boy by M. Robinson was an emotional roller coaster that will wreck you. I was consumed by the story. We definitely know why M. Robinson is known as the Queen of Angst! 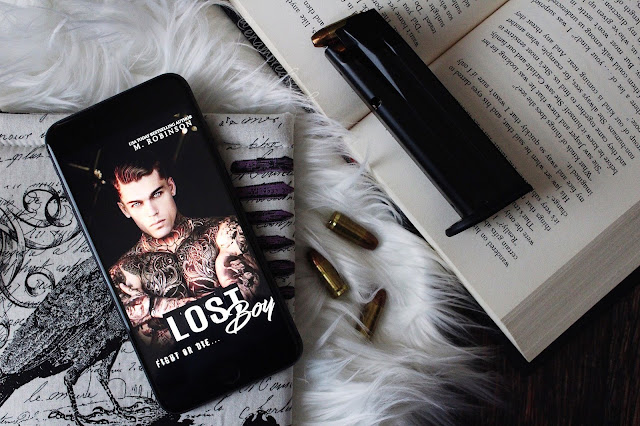 My body molded perfectly against his like I was
made just for him, only him. It was the most overwhelming, mind blowing,
consuming feeling I’d ever felt in my entire life. There would be no coming
back from this.
From him.
From us.
Ruining me for any other guy. He slowly parted his lips, beckoning me to do the
same. I followed his lead, imitating the same rhythm he set. His tongue traced
my swollen lips, and it left the craziest sensation in its wake. A tingly fire
that only he could put out. I’d never be able to lick my lips and not think of
this very moment. It would be lodged next to my heart where he belonged.
I pulled back my tongue, and he took it as an open invitation to gently push
his into my awaiting mouth. Seeking mine out, turning this kiss into something
more than I could have ever imagined it could be.
No words came close to describing what was happening between us. The feelings
he stirred deep within my mind, my soul, matching my emotions with each stroke
of his tongue and lips. This push and pull was as uncontrollable as where fate
wanted to take us. I never wanted him to stop kissing me.
Not for a second.
A year.
A lifetime.
Noah’s lips were meant to be on mine. My body was meant to be beneath his. Our
hearts were meant to be together.
I was his girl.
I had always been his girl. 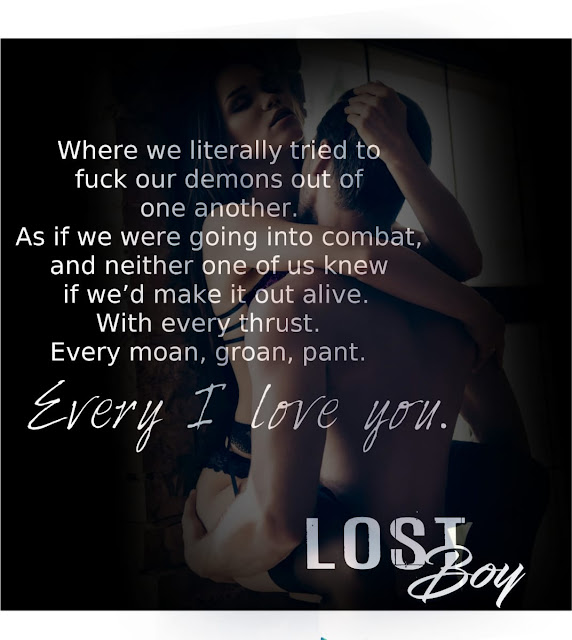 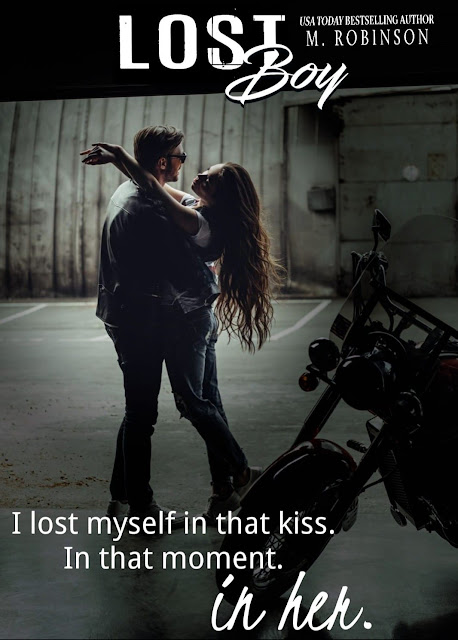 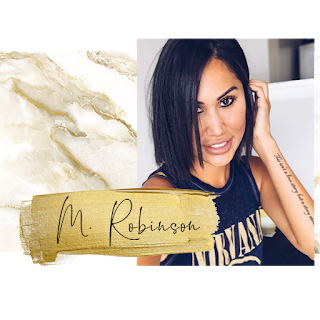 M. Robinson is the Wall Street Journal & USA Today Bestselling Author crowned as the “Queen of Angst” by readers around the world.

Dive into her visionary world that will take you on a rollercoaster ride of emotions and leave you wanting more.
She writes everything from contemporary to suspense romance and is best known for her novel, El Diablo.
When M isn’t in the cave writing her next epic love story, you will find her shopping and living on a boat in Florida with her real life pirate, her lobster, her husband Bossman. Sipping on Starbucks and hanging out with their two dogs, a German shepherd mix and a gordito Wheaten Terrier reading a good book. Or spending time with her family, who she is extremely close with.

Above all, M loves her readers more than anything and loves to connect with them! She is on all social media platforms but you will find her in her happy place the most. Her VIP Reader Group on Facebook or her second favorite happy place, Instagram. 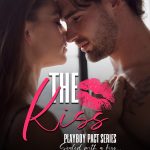