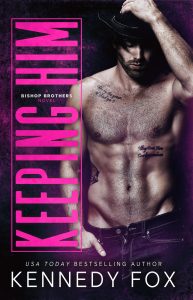 Jackson Bishop is your typical playboy.

Growing up in Texas, the ranch life is all he’s ever known. Horses and late night partying are his lifestyles, and all the local girls know it too. Riding lessons aren’t the only things taught at the stables, and he makes sure clients never leave unsatisfied. Everyone knows Jackson’s a wild card, but not everything is as it seems. He may be a womanizer on the surface, but he’s hiding deep feelings about the one who’s had his heart since he was a teen. Unfortunately, it’s not as simple as roping her in and claiming her as his.

Kiera Young is well-known for her sassy nature and outgoing personality. Though she’s one of the best horse trainers in the area, she’s never been able to tame her best friend and the man she’s secretly loved since she was fifteen—Jackson Bishop. She’s waited years for him to confess his true feelings but as time goes on, she decides she’s done waiting. Kiera finally meets a man who promises to give her the world, and when he pops the question, she says yes—knowing they’re both ready to settle down and start a family.

Even if her heart beats for another man.

Jackson’s certain he’s lost Kiera for good and has no one to blame but himself. However, on the day of her wedding, he can’t bring himself to watch the woman he loves walk down the aisle to someone else. Kiera’s already having second thoughts and knows she can’t get married without his support. It’s not until she’s at the altar that she realizes she can’t let Jackson go and will do whatever it takes to keep him—even if it means running out on her own wedding.

I knew there was so much more to Jackson and Kiera’s story but I had no idea what a wild ride I was in for when I settled in to read Keeping Him, book four of the Bishop Brothers!

Kiera and Jackson have been best friends for almost their entire lives, and in love with each other for just as long. While everyone else has known this not very well kept secret, Jackson believes Kiera deserves so much more than he can provide for her and just wants to see her happy. But when the day finally comes that someone else has stolen Kiera’s heart, Jackson has to come to terms with letting her go, for good.

To say I was truly surprised at the intensity of this story is an understatement. While I see where Jackson thought he was doing what was best for Kiera, it broke my heart to see how much he truly struggled with the reality he was losing her for good. The push and pull between Jackson and Kiera was so strong and then throw in the relationship with Kiera and Trent? WOW! So many things I never saw coming!! I sat holding my breath for probably half the book!

I’m sad the journey is over. Kennedy Fox has given us four of the most amazing stories with the Bishop Brothers and Keeping Him is by far the best! They gave us the most wonderful love story of two life long friends, a story 15 years in the making, and it was the sexiest, sweetest, craziest love story I’ve read. A definite MUST read as the perfect ending to the Bishop Brothers series! Brooke Cumberland & Lyra Parish are a duo of romance authors who teamed up to write under the USA Today Bestselling pseudonym, Kennedy Fox. They share a love of You’ve Got Mail and The Holiday. When they aren’t bonding over romantic comedies, they like to brainstorm new book ideas. One day, they decided to collaborate and have some fun creating new characters that’ll make your lady bits tingle and your heart melt. If you enjoy romance stories with sexy, tattooed alpha males and smart, independent women, then a Kennedy Fox book is for you!

Keep up with all their social media platforms for updates & info!