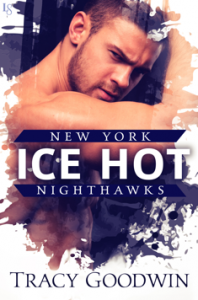 The Nighthawks are hockey’s new expansion team. They’re ice hot. And they’re all about the chase.

Christian: They call me a hockey god because I’m a beast on the ice . . . and off. Men want to be me and women just want me. But now that the New York Nighthawks expect me to lead their team to victory, it’s all work and no play. My eyes are on the prize. Until I meet Serena Ellis, a sexy, curvalicious blonde who doesn’t know me from jack. And just like that, I’m hooked.

Serena: I don’t do one-night stands—especially with celebrity jocks who date models. Lots of models. But the god of hockey is a temptation that’s hard for mere mortals to resist. And after the best kiss of my life, I’m ready to throw my one-night stand rule out the window. Except Christian Chase won’t let me. He doesn’t want a one-night stand. He wants it all. 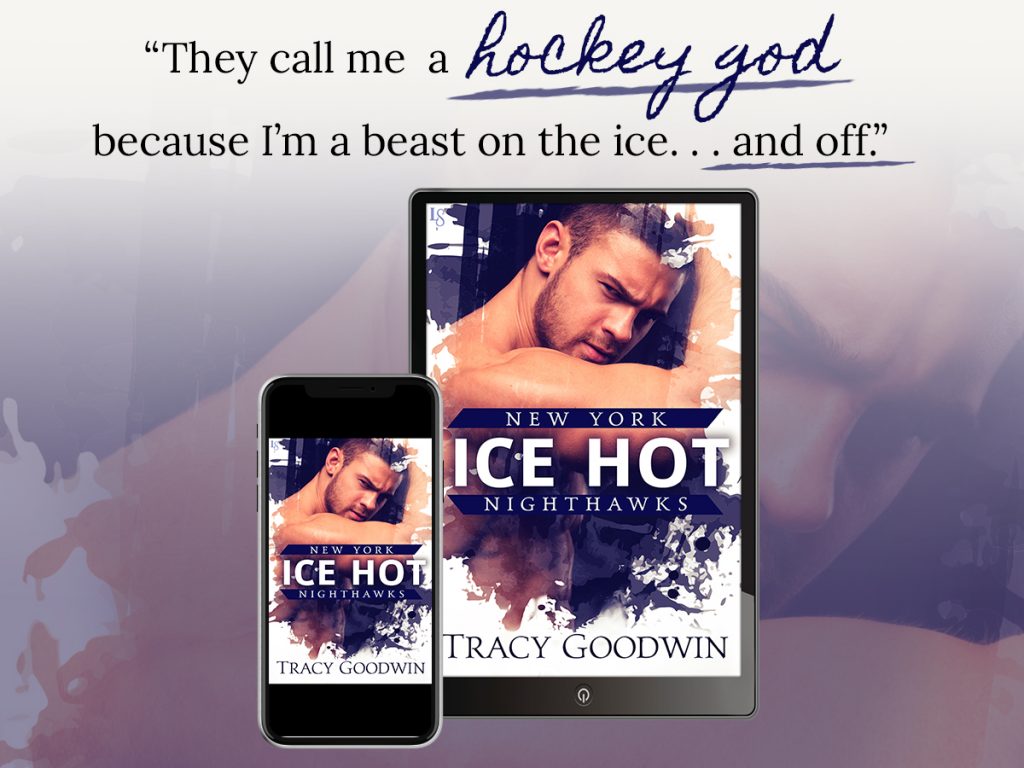 Turning around, I crash into something solid. A blonde with a ponytail, sunglasses on the top of her head, no makeup, and a look of horror on her face.

“What the fuck?” She shivers, glaring down at the crushed Slurpee cup in her hands, and the blue ice covering her white tank and pink yoga pants.

“I’m so sorry.” I grab napkins and offer them to her.

She shoves my hands away. “Stop. Just stop. Do you honestly think I’d let you cop a feel?”

“No!” I’m quick to right that misconception. “I was handing them to you, not touching you. I would never touch you.”

“Don’t sound so disgusted at the possibility.” She tosses the cup in the trash.

Shit. I’m anything but disgusted. I’m a man. And this girl is hot. Or would be, if she weren’t furious with me.

Peeling her tank from her chest, she reaches in, scooping a handful of blue slush from her cleavage before tossing it in the garbage can. “I’m going to kill Becca. Yoga will relax you. What a joke! It leaves you sore, miserable, and sweaty.”

I grab more napkins. Is this all I can do? Stand like an idiot with a stack of napkins in my hands while she mutters to herself? What the hell has happened to my social game?

Before I can offer to buy her another Slurpee, her head snaps back to me. “Can I help you with something or did you want to burn me with scalding hot coffee before you left?”

I’m staring and gulping. My throat is dry. Still, I manage, “How can I help?”

“Thanks, but you’ve done enough.” Staring at her blue hands before wiping them on her yoga pants, she hurries out the door.

Since the napkins were a complete waste of time, I plop cash on the counter to cover the Gatorade and chase after her. She’s parked one aisle over from me, standing at the gas pump. I grab a towel and my extra T-shirt out of my hatch and head toward her car. A metallic blue Volvo XC90. Sporty, yet sexy.

“God damn it. Come on.” She struggles with the gas cap, then slams her palm against her car. “Shit.”

Twisting around to see me, she leans against her car with an annoyed sigh. “Did you come over to spill gas on me, too?”

“Nope. I’m still trying to help.” I offer her the towel from my gym bag, but she takes a step away from me like I’ve got the plague. “I come in peace—look, it’s a white towel.”

“Too late for peace. I have Slurpee goo in my underwear, you’ve frozen my lady parts, and now the ice is melting.” She looks down at the blue puddle on the concrete. “Oh, God. It’s dripping. It looks like I’m peeing a Smurf in public.”

“Take the shirt and the towel. I’ll fill your tank while you change.” She’s tense and dripping onto her flip-flops. I say the only thing I can think of to make this better. “I really am sorry.”

She narrows her eyes. “So you say, but how do I know you’re not going to steal my car?”

I laugh. I can’t help myself. Sure, I’ve been trash-talked a lot in my life, but I’ve never been accused of grand theft auto. My contract was discussed ad nauseum on ESPN. Even non–hockey fans tend to know how much I make annually. It was national news.

She glares at me. “What’s so funny? Auto theft happens all the time, right?”

Reaching into my pocket, I hand her my keys. “You can have mine.”

She grabs them, reading the Land Rover emblem, then looks for my SUV. After setting her sights on it, she presses the panic button. Not once, not twice. Nope. She presses it three times, and the horn blares as my hazards blink furiously. I cancel the panic alarm, though it’s too late. We’ve already caused a scene and my ears are ringing. Still, I exhale, relieved that she didn’t press the tailgate button. The last thing I need is for those banners to go flying through the parking lot. Chasing them would make me look like even more of an oaf, if that’s possible after spilling a sticky blue Slurpee all over her. As I hand my keys back to her, she grins.

The day, my shitty day, just got a whole lot brighter. Because of one grin . . . from this woman. That’s all it took.

Reaching for my towel and shirt, she pauses before heading to the restroom. “I promise not to lose your keys or flush them down the toilet. No matter how tempted I may be.”

“I appreciate that.” I wink at her, noting how her sarcasm draws out her dimples. “I promise not to steal your car. No matter how tempted I may be.”

The planes of her heart-shaped face soften, and she opens her mouth, like she’s about to say something. I’m intrigued. Until she smirks. I can tell she’s trying not to laugh as she hurries to the restroom without a word. Though I’m left wondering what she wanted to say, I can’t help but smile. It’s obvious to me that this woman has no idea who I am, which actually excites me. Being considered a car thief means that this is one person who doesn’t want anything from me.

My cell rings, and I read the screen. Dad. Speaking of someone who wants a handout, I reject the call, choosing instead to shove my cell in my pocket, top off the blonde’s tank, and screw her gas cap back on. The signs say I shouldn’t be on my cell. What better reason for rejecting a call from my dad? Besides, the last thing I want to do is set fire to the mystery woman’s Volvo.

Just as I close her gas tank door, I catch sight of her crossing the parking lot, wearing my white T-shirt and her flip-flops. My hand stills, and I can’t help but stare.

The shirt covers her ass and reaches her thighs. When the sunlight hits at just the right angle, I can see the outline of her body. Tight, but not emaciated. She wears sunglasses and saunters like she is the sexiest woman I’ve ever laid eyes on, which I’m pretty sure she is. Her confidence is a total turn-on.

“Your towel and my clothes are a lost cause.” Her sweat mingling with gas fumes is oddly intoxicating. “Thanks for the shirt and for filling my car.”

“Anytime.” I want her number. I need it, but I can’t get my mouth to work fast enough.

Someone whistles at her, and she tosses me my keys before heading to her driver’s door. “I’ve gotta go. Thanks again.”

She slides into the driver’s seat, turns the ignition, and fastens her seatbelt. As she drives away, I notice a blue stain on her cheek. Fuck. I don’t even know her name. Just that she wears my shirt even better than she wore a Slurpee, has no shame, and is the first woman not to recognize me in forever. God damn. Why didn’t I get her number? 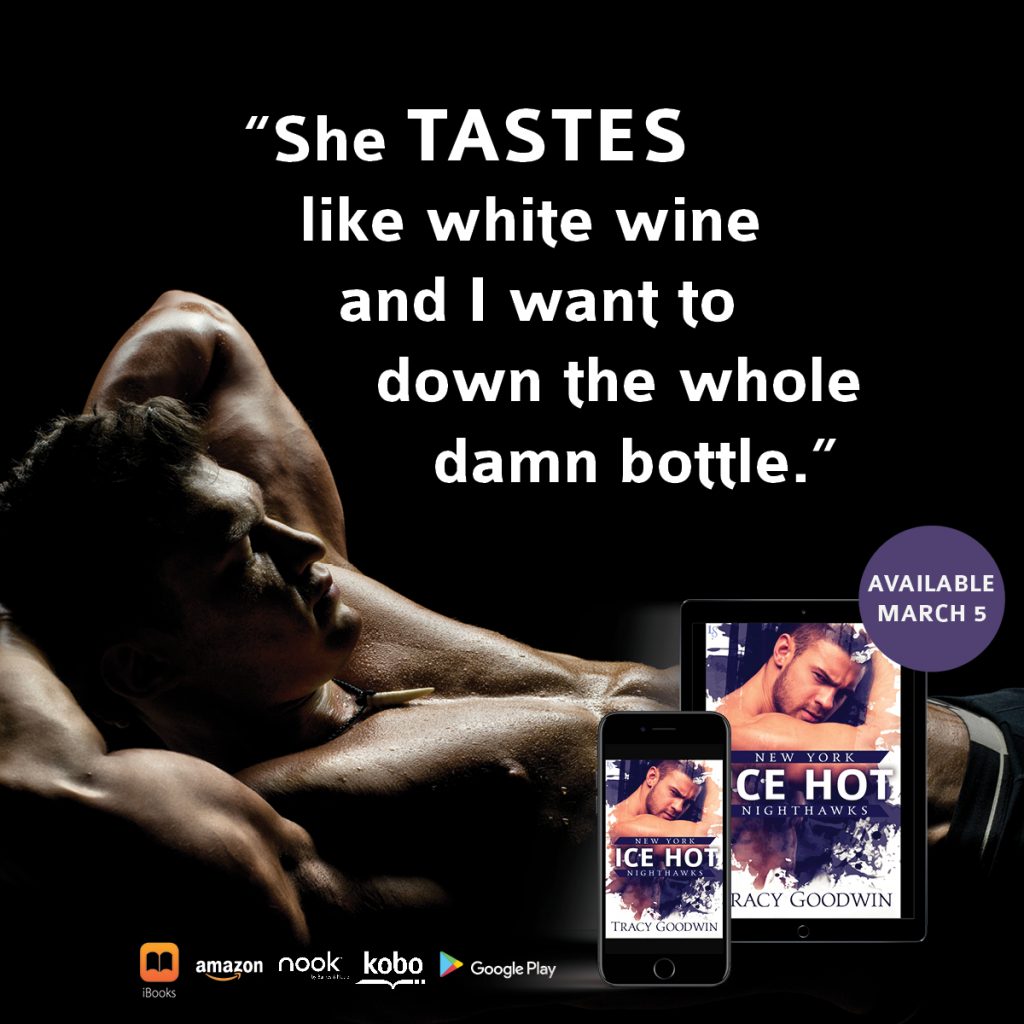 Tracy Goodwin is a USA Today bestselling and award-winning author. Throughout a career spanning a decade, she has achieved both traditional and indie publishing success. She is the author of sexy contemporary romances and sweeping adult historical romances. In addition, Tracy pens vivid urban fantasy paranormal romance bursting with excitement. Though the genres may be different, each story delivers her unique blend of sensuality, poignant emotion, humor, and unforgettable characters that steal readers’ hearts.