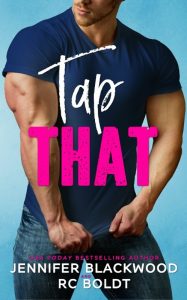 The beer's not the only thing getting tapped.

I have a secret. It’ll get me fired if my boss ever finds out…which shouldn’t be a problem except for one thing: my coworker, Reid Morgan.

He’s cocky, aggravating, and that hot-as-sin mouth simultaneously makes me want to slap him and melt into the mattress.

Now that he’s discovered my secret, he’s doing everything in his power to take my job.

I have a problem: my pint-size spitfire of a coworker who’s primed to take my promotion.

She’s infuriating, sexy as hell, and I just can’t seem to keep my hands off her.

Now we’re both vying for the same position…and only one of us can come out on top.

Tap That is an enemies to lovers read with enough sweet, sassy and angst to keep you entertained and wanting more! I’m already a huge fan of RC Boldt and Jennifer Blackwood is a new to me author. I absolutely love this book! Their writing is amazing!

Reid thinks he has everything in the bag until he finds out Callie has taken the one thing he wants. When Reid decides to make Callie’s life hell, he had no idea that he’d fall for the girl who is taking his top spot.

I truly enjoyed Tap That as it was full of funny moments, sexiness, and a fair share of deep, meaningful moments. I loved Reid and Callie from the start and loved their banter from the first moment they met. Both characters were charming, so very real and when they came together, it was pure magic.

I loved Tap That from R.C. Boldt and Jennifer Blackwood. I am a huge fan of R.C. Boldt. She writes some of the best romcoms I have read. Jennifer is a new to me author, but I am excited to read more from her! Tap That is an enemies to lovers story with all the feels and some very laugh out load moments.

Callie Anderson wants to stand on her own two feet and be successful. He parents have never been the supportive type and expect her to conform to what they want. She is determined to follow her own path. The only problem? She has a secret and it’s a big one! But she is determined to fake it until she makes it as the new manager trainee at On Tap, a local brewery.

Reid Morgan has been the top bartender at On Top for a while now and is determined to be their next manager. This is the next step before putting his plan in place. But he is blindsided when the position is offered to someone else, someone he feels may not be qualified for it. He is determined to prove the job should be his.

The minute Callie and Reid meet, Reid is determined to see Callie fail. But what neither expected as they took shots at each other was the intense attraction they felt for the other. Both attempted to avoid each other at all costs. But some things are unavoidable. As they mingle business with pleasure, what happens when only one of them can come out on top?

I loved Callie. She was strong, and determined, but also hid a vulnerable side. Reid was a great guy, to everyone but Callie. He was cocky and aggravated Callie at every turn. I loved their banter! Both gave as good as they received. The characters were so likeable, and I especially loved Reid’s grandma and friends, they were a hoot! Tap That was such a fun and sexy read! 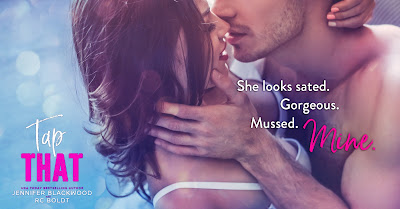 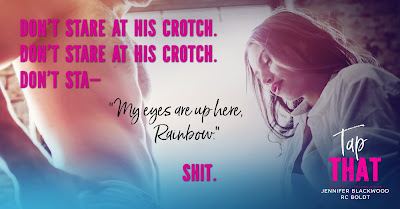 Jennifer Blackwood
Jennifer is a USA Today bestselling author of contemporary
romance. She lives in Oregon with her husband, son, and poorly behaved black
lab puppy. When not chasing after her kiddo, you can find her binging on
episodes of Gilmore Girls and Supernatural, and locking herself in her office
to write.
FACEBOOK
FACEBOOK GROUP
WEBSITE
TWITTER
INSTAGRAM
RC Boldt
RC Boldt is the wife of Mr. Boldt, a retired
Navy Chief, mother of Little Miss Boldt, and former teacher of many
students. She currently lives on the southeastern coast of North Carolina,
enjoys long walks on the beach, running, reading, people watching, and singing
karaoke. If you’re in the mood for some killer homemade mojitos, can’t recall
the lyrics to a particular 80’s song, or just need to hang around a
nonconformist who will do almost anything for a laugh, she’s your girl. 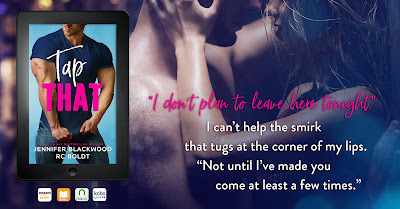