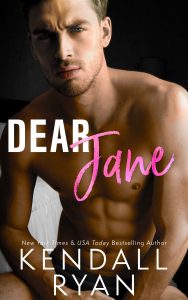 I broke her heart ten years ago and left town.

She hates me, and rightly so. It doesn’t matter that the rest of the country loves me, that I’m a starting quarterback with a multimillion-dollar contract. Because when I look in the mirror, all I see is a failure who was too young—and too afraid—to fight for what I wanted.

But I’m not that guy anymore, and all I need is one shot to convince her.

***
He has no idea what happened after he left. And now I’m supposed to work alongside him like we don’t have this huge, messy history?

But I’m older now, wiser, and I won’t let anything stand in my way of doing a good job for this league. Not even one overpaid, arrogant player who thinks we’re going to kiss and make up.

News flash, buddy: I am over you.

Weston left a heartbroken Jane behind ten years ago in pursuit of a football career. They’ve both moved on with their lives, after all this time, and think nothing of each other. So it’s not a big deal when Weston is signed to the team that Jane works for and her father coaches, right?

Those ten years have done nothing but solidified the fact that neither Weston nor Jane has had closure. But is that what they really want out of all of this?

Dear Jane was a fast paced, witty, sweet and romantic story where the two main characters, Weston and Jane, still had the amazing chemistry that they had back when they first fell in love as teens all those years ago.

I loved everything about this story. The strong woman Jane had become with an strong work ethic, the amazing athlete Weston had become yet how completely vulnerable he was with Jane and the unbelievable moment I never saw coming that the two of them shared together. Truly, this story had a little bit of everything I was looking for and I enjoyed every moment!

Redemption by Laura Lee is now live!
Irreverent by Skye Callahan is live