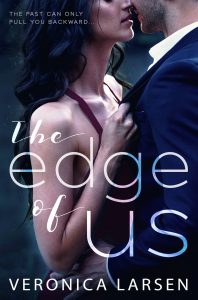 The Edge of Us by Veronica Larsen
Published by Self on 08/01/2017
Genres: Contemporary Romance
Buy on Amazon US | Buy on Amazon UK | Audible | iBooks | B&N
Goodreads

Eight years ago, Cole Van Buren left me at the altar without a single explanation. My heart’s been at a standstill ever since, the anger keeping me from moving on. Keeping me from seeing the man who’s been right in front of me all this time…

Andrew’s been the friend I needed, the one constant through the hardest times of my life. But one night, the lines blur and we’re tipped into something more. Just when I’m ready to explore what we could be…

My ex comes back.

Cole says he didn’t come to get me back, but I should know better. The answers he dangles overhead are the ones I need to finally let go.

Except there’s no such thing as closure, only a past that wants to pull you backward.

The Edge of Us by Veronica Larsen was gripping, emotional and will consume you. The story of three people whose lives are about to collide.

Mila Zalenko never knew why her fiancé left her on her wedding day. Hurt and alone, she decides to have revenge and instead cries in the arms of the man that became her friend and rock in the years to come. Now she is not only successful, but actually finding her footing and content. Now years later, that man, Andrew, and her may be on a precipice of something new, something more.

Cole is the man who left her all those year ago without an explanation. Andrew is the man she decided to have her revenge with, at least in her mind, but ended up becoming her best friend. Both men were likable and good men. Yes, Cole hurt her and left her, but he had his reasons, good or bad. Andrew and Mila have always had a good connection, but is it enough to move forward with?

I really liked Mila. What happened eight years ago left her hurt and lost, but at the core, she is strong, determined and speaks her mind. Andrew has been the one person who has been there for her since that fateful day. They have supported each other but before the ghost of her past reapears something shifts between them. Cole was the man who hurt her, but what does his return mean?

I absolutely love that we got all three points of view. In a story like this, you need it. No one is the villain. It’s the story of three people and where their hearts have led them. I know a love triangle may deter some from reading this book, but this story is so worth the read. Emotional, heartbreaking, but also beautiful, it is the story of finding love again, but for whom is the question.

Veronica Larsen began writing around the age of seven, scribbling Nancy Drew-like stories between the margins of composition notebooks. Her journey into the romance genre began once upon a long military deployment when she penned a steamy romance for her husband, a US Marine. This story eventually turned into her debut novel Entangle. She fell in love with writing romance and hasn’t looked back since. Her novels are known to feature engaging story-lines, relatable characters that tap into heart-tugging truths, and a tangible chemistry that builds throughout the story. She holds a Bachelor of Science in Psychology, which has come in handy in resolving the messy lives of the fictional people in her head.