Chasing Vivi by A.M. Hargrove
Published by Self on 07/13/2017
Genres: Contemporary Romance
Buy on Amazon US | Kobo
Goodreads

Vivi Renard—a blast from the past—wasn’t supposed to affect me like this.

When I knew her ten years ago she was nothing more to me than a highly functioning brain.
Hell, I paid her to do my homework.

Only now … she’s drop dead gorgeous but had the nerve to turn me down for a date … several times.
No one turns me—Prescott Beckham—down for anything.
I’m on a mission and won’t stop until I’m firmly planted between her thighs, hearing her moan my name.

Her plump red lips have me dreaming filthy things and acting like a kid with his first crush.
If I can’t have her, I don’t want anyone else to either.
What’s worse is I want to own every single bit of her.

Except there’s a slight problem.
Vivi can’t stand me.
Even the old let’s be friends again thing failed.
She tossed it back saying we were never friends to begin with.

But I’m the king at playing ruthless games.
So she’d better be ready to drop her thong, because Vivi is going to end up in my bed sooner … or later.
And I’m pretty damn sure it’s going to be sooner.

Chasing Vivi by A.M. Hargrove is a second chance at love story for enemies to lovers Vivi and Prescott. They went to high school together to a private, expensive school where each had very different experiences. Years later, Prescott runs into Vivi and decides he had to have her. Easy, right?

Nothing is ever easy. Vivi Renard hated her teenage years. High school for her meant getting bullied at every turn. Her only highlight was her crush on Prescott Beckham, but all he ever saw was the girl he paid to help him with his homework. She dreamed of the day he would really see her, but he never did.

I loved Vivi. She had a very difficult time during high school that left a huge impact on her life, but instead of letting it get her down, she worked hard to overcome obstacles to become the woman she is today. She is stronger and more determined and fights for what she wants. But when Prescott enters her life again, she wants nothing to do with him. He is trouble with a capital T.

Prescott had it easy during high school. Popular and girls wanting him at every turn, he and his friends lived it up. The girl who helped him with his homework was just another girl at his school. Years later he runs into her again and she rocks his world. She is beautiful and he decides he must have her, but she wants nothing to do with him. But he was determined to win her over at any cost. Though he could be very demanding and pushy, he could also be sweet and romantic.

Both Prescott and Vivi had past baggage they carried around that held them back from truly opening up with each other. Though they were both attracted to each other, neither was ready to fully give in. They had a push and pull relationship throughout the story. Would they be able to find a way to truly open up to each other or would they only fall further apart?

Chasing Vivi was a slow burn story of second chances and learning to trust again. It was both angsty and sweet and full of secondary drama that will draw you in.

Vivi rubs her hands on her thighs. She’s nervous and has been ever since I stood over the table. She seems to have more confidence in herself now than she had when I knew her but that doesn’t account for her skittishness. Back at Crestview, she had been overweight—I knew that—only I didn’t know, or maybe I didn’t pay attention, to the other girls giving her a hard time. And why should I have? I had so much going on in my head I could barely keep my own shit together.

“You did a pretty good job with me. I only figured you put the other girls in the same boat. You know, with the homework stuff and all.”

“I had you wrapped around my homework binder at Crestview. That’s your metaphor for finger.”

It’s not a question. I’m baffled because I had no idea. Yeah, I was a flirt, but I flirted with everyone to get what was necessary. It was the only way I knew how to accomplish my goals. She needed the money and always acted like she had no interest in me whatsoever.

Sexy little Vivi can’t say dick out loud. Isn’t that the cutest thing in the world?

Her chest puffs out as she says, “Dick.” Her lovely neck flushes pink and two bright spots of fuchsia dot her cheeks. This is sweet innocence at its utmost.

“Excellent. Now say cock.” I put a great deal of emphasis on the “c” and “k” at the end of the word. Silver gray irises turn stormy and deep creases form on her forehead.

“Why would you want me to say that word?”

“Because it makes you uncomfortable as hell and I’m an asshole. I like to see you squirm, Vivi.”

“I won’t say that. It has nothing to do with truth or dare. And besides, it’s my turn.”

I take a couple of good slugs of my drink, sit back, and cross my arms. “Do your worst.”

She puts an elbow on the table and rests her cheek on her hand. “Truth or dare?”

“Dare.” It’s impossible not to laugh at her comical expression. I curtailed her plans.

“I most certainly can.”

Her head tilts back, and I can only imagine what she’s thinking. A chuckle escapes.

“Okay, then. I dare you to tell me why you loathe the man you’ve become.” She gloats at the clever way she’s twisted the game. And stupid me should’ve figured out she’d come up with something like this. Vivi was always brilliant.

“Loathe is extreme. Let’s say I’m not particularly fond of who I am right now.”

Now I’m the one who’s squirming. Where do I even begin? Vivi is almost a stranger to me. There’s no way I can bare my pathetic soul to her.

“I have daddy issues.”

“Really?” Her question is one of disbelief and she appears to be holding back a laugh.

“Um, yeah. Prescott Beckham, the guy with the world at his fingertips, has daddy issues? I think not. I Googled you after I ran into you that day. From all accounts I read there were no daddy issues to be found. Nada. Try again.”

“I have a team that keeps my secrets out of the media. You wouldn’t find anything on me. But it’s true. I grew up without a mom and my father was not much of one. So, there you have it.” I give her one of my best smirks. It usually does the trick on most women.

She leans back and tucks her chin closer to her body. “That’s it? And I’m supposed to buy that?”

“That’s all I have for sale, Little Wolf. Sorry.”

“You’re not a very fair player.”

“Nope. I’m done.” She drinks another swig of her beer.

“No, you aren’t. I’m picking for you. Truth. How many men have you fucked, Vivi? And what exactly have they done to you?”

She shoves her arms into her coat and pushes at me to get out of the booth. But I have zero intentions of going anywhere. “Let me out, Prescott.”

“Not until you answer me.”

“That’s none of your business. How many women have you been with?”

“Too many to count.”

Her jaw flops open and I close her mouth with a finger under her chin. 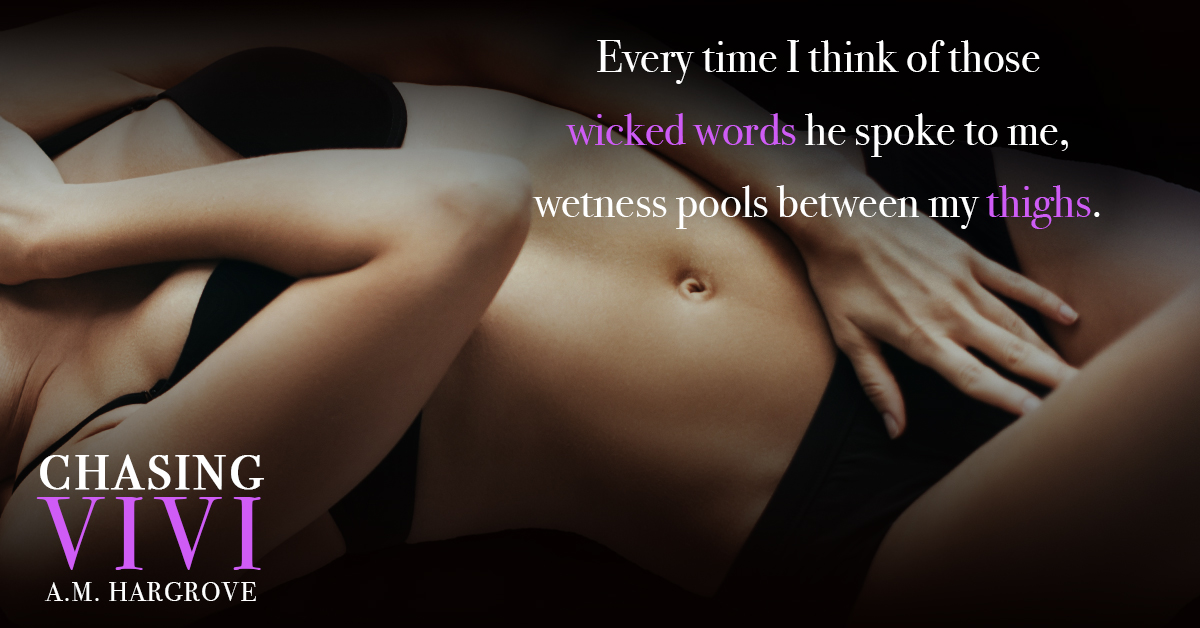 One day on her way home from work as a sales manager, USA Today bestselling author, A. M. Hargrove, realized her life was on fast-forward. If she didn’t do something soon, it would be too late to write that novel she had dreamt of her whole life. She slammed on the brakes, made a crazy decision, and quit her job. Then she reinvented herself as a Naughty and Nice Romance Author.

She fancies herself all of the following: Reader, Writer, Dark Chocolate Lover, Ice Cream Worshipper, Coffee Drinker, Grey Goose Aficionado, and #WalterThePuppy Lover. If you’re around her for more than five minutes, you’ll soon notice she has a tendency to talk you ear off.